Social and political tensions are running high, even for an election year. More than once over the past year I have commented to Luke and Elizabeth that I am grateful to be living where I am. It’s hard to picture riots breaking out in the well-groomed streets of DFW.

The shootings in Dallas felt unreal. I followed the incident online as it unfolded, saw familiar buildings lit up with police lights, heard sniper fire rattle down familiar streets, saw a police officer die on live video, watched the death count rise to five. It felt like a sinister presence had invaded my adopted home.

Since then, I’ve noticed that most of the people I’ve interacted with seem to be making an effort to be extra friendly and kind. I work in customer service, so I come into contact with a lot of people every day, and this has been a definite trend since the shootings. I can’t think of a better response to such a horrible and hate-fueled tragedy. It has made me glad all over again to be living where I am.

Elizabeth’s post-graduation plans are fairly straightforward: get a job, save up for a car and then relocate to the “left coast.” Texas is a bit too conservative for someone of her youth and temperament. She found a local job pretty quickly, and is now in the saving phase.

Luke left for his summer stint in Anza, and Elizabeth and I soon discovered that he was apparently the only one cooking meals anymore. With him gone we live like slovenly bachelors, scrounging up meals that require minimal preparation and letting the dishes pile up in the sink. It’s been eye-opening.

The pastrami on rye at Carshon’s Deli turned out to be everything I was hoping for. I will be going back for sure.

While we ate, I realized that Trinity Park lay directly between the deli and the art store, and that Elizabeth had never been there. So we made an impromptu addition to our itinerary and stopped at the park. 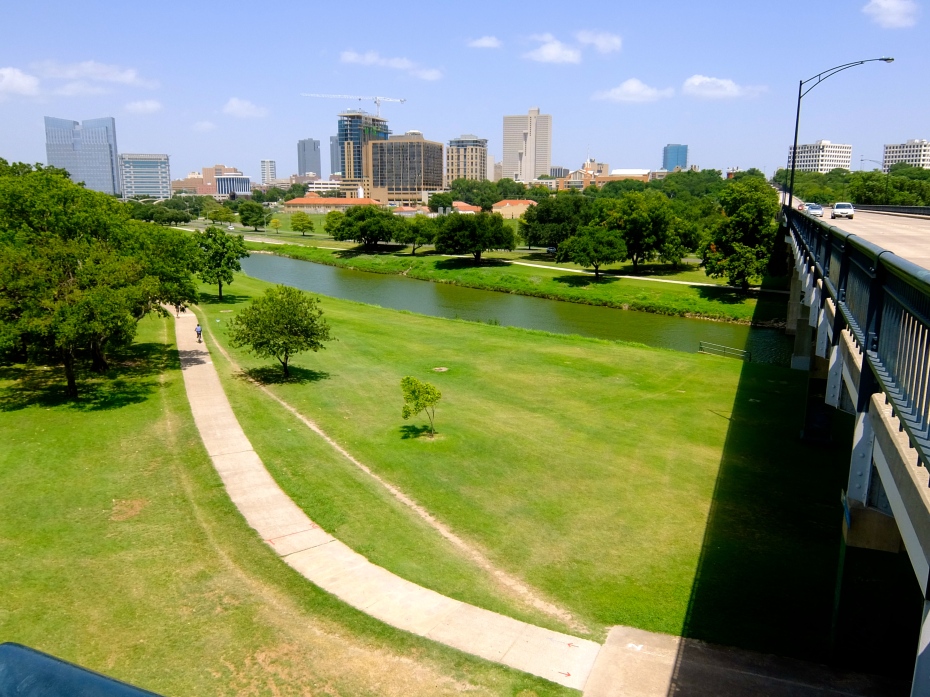 My favorite part of the visit to the park was all of the couples and families and groups of friends we saw out playing Pokemon Go. I’ve never played it myself and probably won’t, just because there’s a limit to my spare time, but anything that gets people out spending time together in the fresh air and sunshine is a good thing in my book.

Speaking of sunshine, it was a hot day and we were catastrophically thirsty by the time we got back to the car. Elizabeth had brought a bottle of acai-pomegranate juice for hydration on our adventures, but we sucked that down in like ten seconds as soon as we got back to the car, and we were still as thirsty as before. We drove over to Asel Art supply, and by lucky coincidence there was a smoothie place a few shops down. I plunked down an impressive $16 for a bottle of orange juice and a green smoothie, and we headed over to the art supply place.

Picking out art supplies cannot be rushed. I found a stool near the register and got comfortable eavesdropping on the pleasant chatter of the two shopkeepers while Elizabeth spent like half an hour comparing the delicate fruity notes and woody undertones or whatever of various shades of colored pencils. When I finished my smoothie I was STILL thirsty, so I asked one of the shopkeepers if there was a drinking fountain or sink in the store where I could refill my cup. He said there wasn’t, but he went into a back room and got me a bottle of water. When I tried to pay for it, he laughed and said it wasn’t for sale. “I mean, it’s not like we’re going to refuse you water,” he said, as if this were a basic tenet of human courtesy. I absolutely love Texans.

Elizabeth finally made her selections and paid for them with her own paycheck money. We did a bit of grocery shopping in Hurst and then called it a day.

These are eventful times we live in, but there is no place I’d rather spend them. Texas suits me just fine.