Deep in the Heart of Texas (Road Trip, Part I)

I like my job, but retail is a harsh mistress. When my supervisor mentioned that I should use my accrued personal time soon, before things started picking up for the holidays, I did not argue. Luke had a birthday coming up on the 16th, and school doesn’t start here until the 22nd. Clearly it was time for a large-scale outing.

At the planning stage, we were in the middle of a brutal heatwave that had been dragging mercilessly on for weeks. Where, I pondered, can one escape both heat and the galling harness of civilization? In a cave, naturally. The cool, sprawling caverns of south Texas. Luke was immediately on board with this.

The original plan was pretty simple. Drive down to Natural Bridge Caverns, check out the famed San Antonio Riverwalk while we were down there, maybe poke around in Austin on our way through. Nearly everyone I mentioned this plan to told me about something they particularly enjoyed in that neck of the woods, and said I should check it out. In the spirit of exploration and adventure, I wrote down all of these suggestions and added them to our itinerary. Some of them ended up being highlights of the trip.

We rolled out of DFW via Fort Worth a little after 8 am on Monday morning, with a light rain adding to the sense of adventure and some heavy commuter traffic whetting our appetite for freedom on the open road. Around 10 am we pulled into the small town of West and made our first stop of the day.

So, kolaches. I’d never even heard of them before we moved out here, but Texans freaking love them. The fruit version is basically what Californians call “Danish pastry” or just “Danish.” Texans like them with sausage instead of fruit. My impression of West, TX, is that it was originally settled by Czechs who took their native love of kolaches to a new level and created a whole local industry around them. We were barely on the outskirts when the billboards started advertising about kolaches at this or that bakery. I’d say we drove past at least four Czech-style bakeries with the word KOLACHES emblazoned on their exteriors just in the half-mile between our exit and the particular bakery that had been suggested to us.

To be fair, kolaches are pretty tasty. We bought an assorted dozen of link sausage, ground sausage, fruit and even mocha-espresso-and-cream-cheese kolaches, and the nice lady even added three chocolate chip cookies for free and wished us happy and safe travels. Texans are a lovely people.

Another friend had said that the Inner Space caverns in Georgetown are a must-see, so that was our next stop. By then the sprinkles had become a downpour, and we were feeling grateful that our travel plans hadn’t relied on sunny weather.

Luke is going through a phase where he does not smile in photographs. Apparently he agrees with Mark Twain’s philosophy that “a photograph is a most important document, and there is nothing more damning to go down to posterity than a silly, foolish smile caught and fixed forever.” He enjoyed the road trip as much as Elizabeth and I did, but you would never know it to look at the photos. All of his “foolish smiles” vanished as soon as the camera came out. 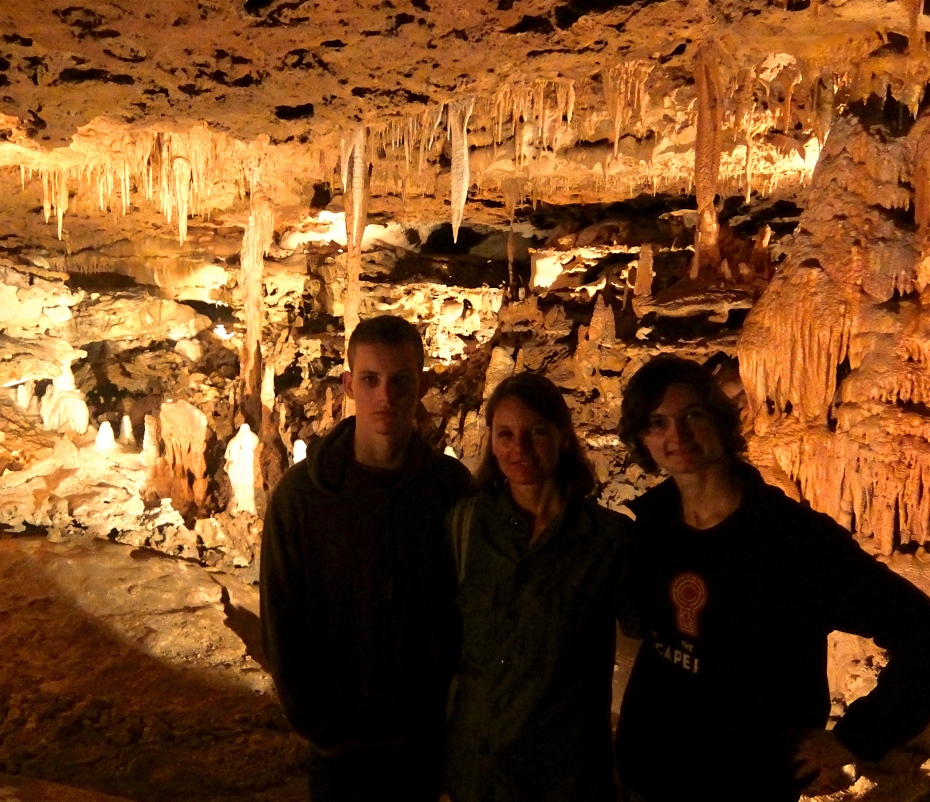 The Inner Space caverns were pretty spectacular. This formation looks to me like an ancient throne room where everyone was turned to stone by some evil curse: 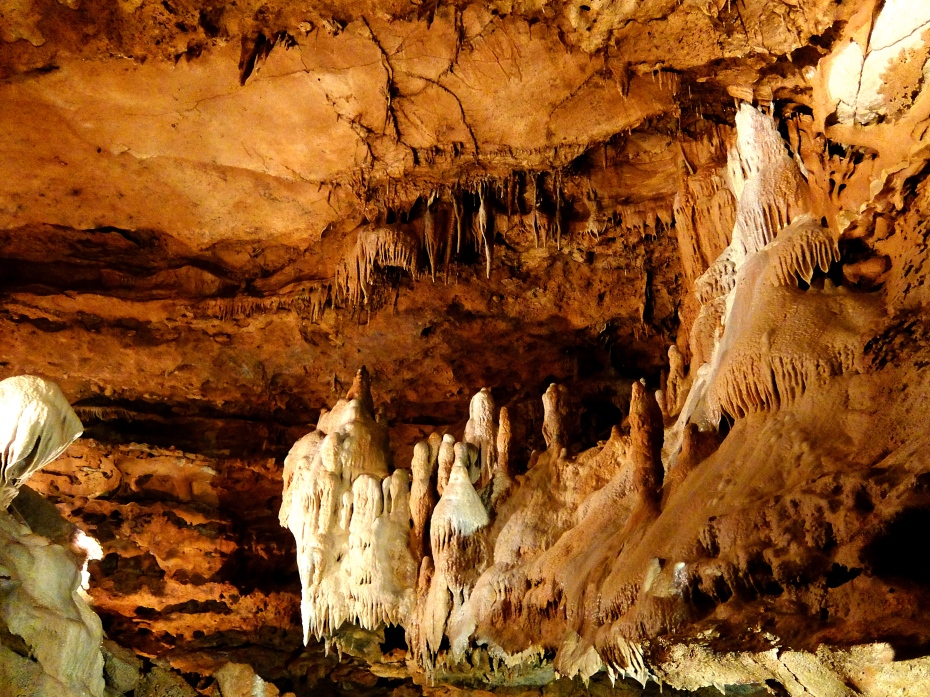 As beautiful as the caverns are, the guided-tour format felt a bit too much like civilization. The faux cave-paintings at the bottom are a good example of this. I enjoyed them, but they added to the impression that we were at some sort of “Prehistoric Land” theme park instead of exploring a cave. And the pathways were all very Structured and Safe. 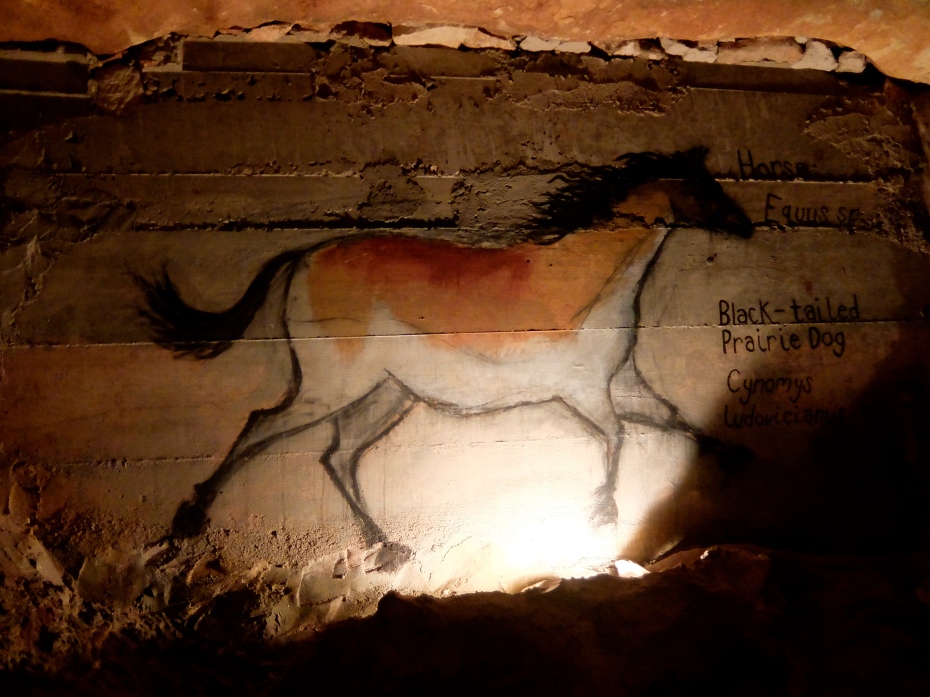 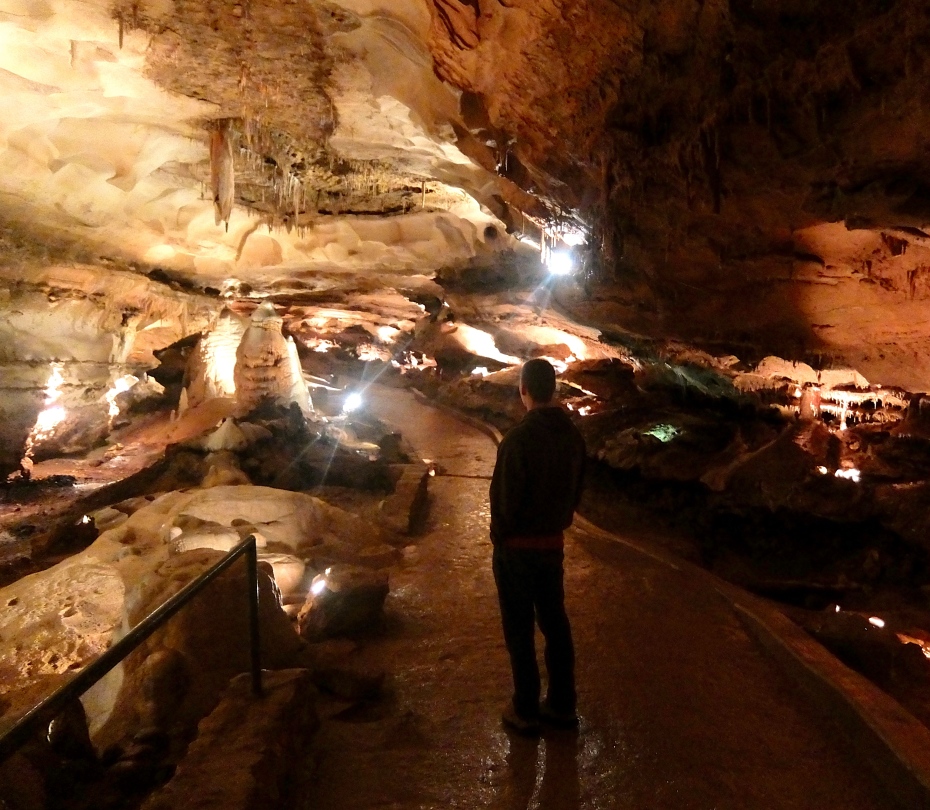 We decided that someday soon, maybe over spring break, we will seek out some untamed caves in the wild. They won’t be as fancy as the “show caverns,” but I think we’ll have more fun exploring them.

The rain was coming down in sheets by the time we got to Austin, so our plans to check out the trails around Lady Bird Lake were rescheduled for the return trip. The San Antonio Riverwalk wasn’t looking too promising at that point either. Around 4:30 pm we checked into a hotel in San Marcos to wait out the worst of the rain and see if the weather would clear.

The kids fell asleep pretty much the instant we got into the hotel room. I walked to a nearby McDonalds to score some free wifi and check the weather reports. (I had originally planned to pay for motel wifi, but I was so astonished by the fact that they wanted to charge me per device that I just told them never mind.) Anyway, according to San Antonio’s weather forecast, the downpour was expected to lighten to scattered showers that evening, and then more thunderstorms would roll in the next day. I let the kids nap for about two hours, and then we got back on the road.

By the time we got to New Braunfels, I was realizing the folly of getting a hotel in San Marcos instead of closer to San Antonio. We did a lot of unnecessary backtracking over the next 18 hours. What can I say, the distances looked a lot shorter on the map.

The rain petered out to on-and-off sprinkles just as we found a place to park near the Riverwalk. Sweet!

The San Antonio Riverwalk was easily my favorite part of the whole trip. It looks like what would happen if Disneyland’s Jungle Cruise ride were relocated to Riverside’s Mission District. But even cooler than that. It’s actually built a full story below street level; here’s the view from where we parked just above it. 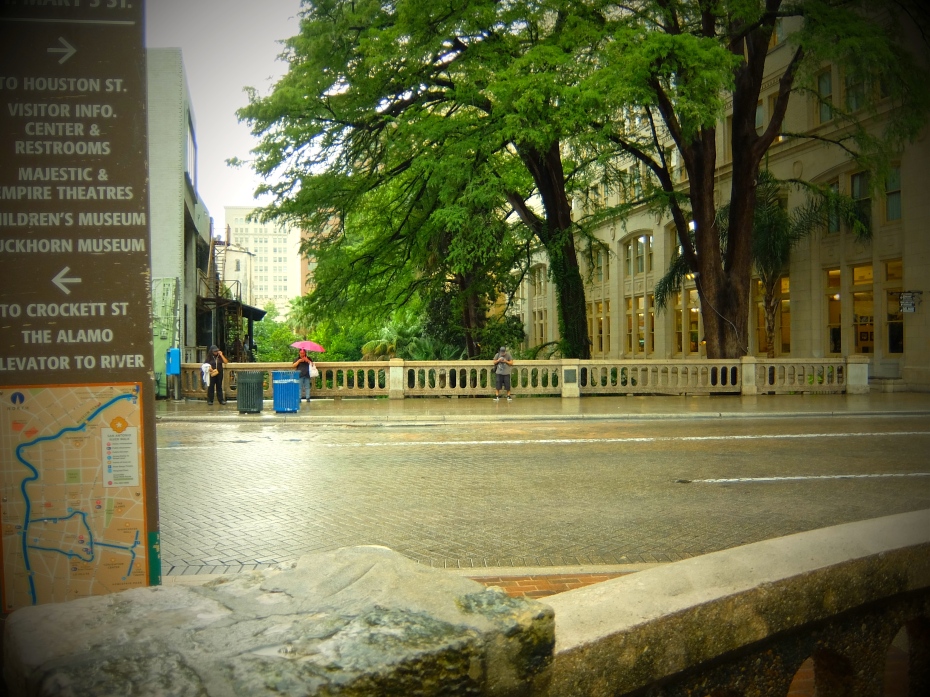 Sorry about the weird filter, I wasn’t paying attention to my camera settings. Anyway, you access the Riverwalk via staircases at every street crossing. Once you’re down there, everything is magical. 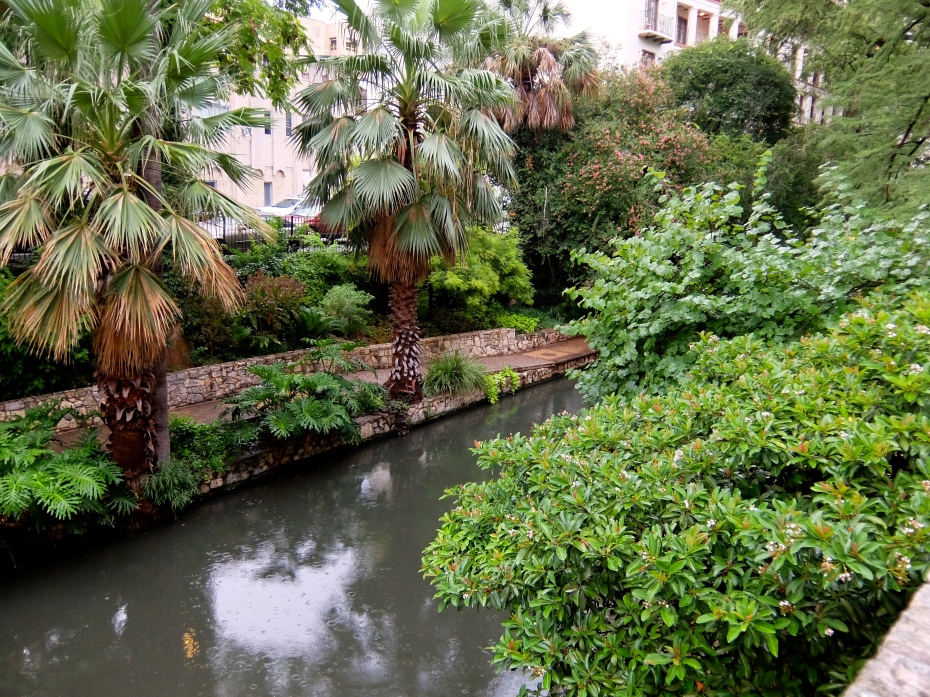 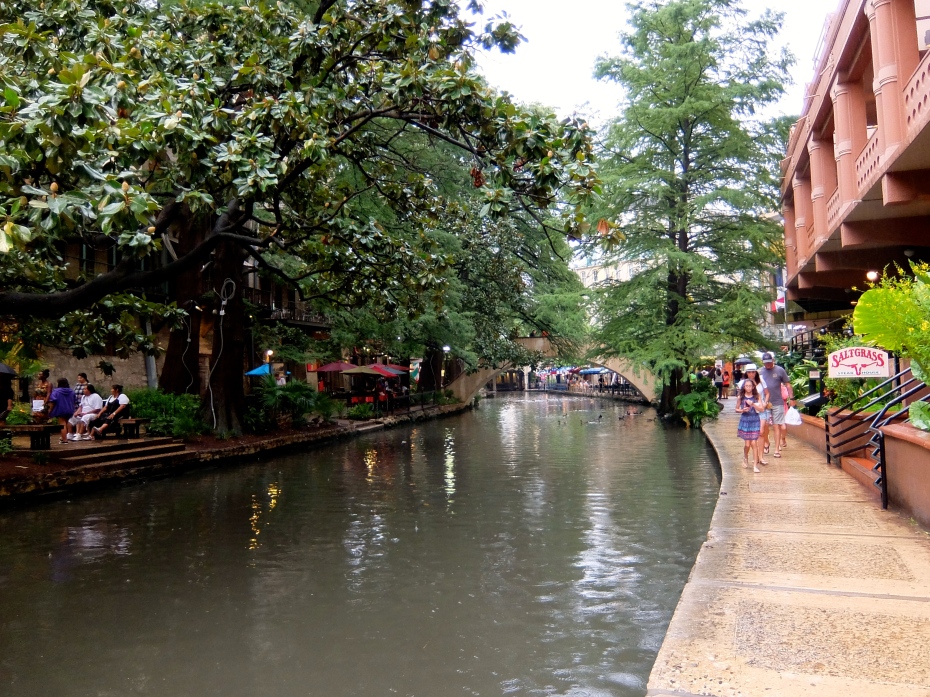 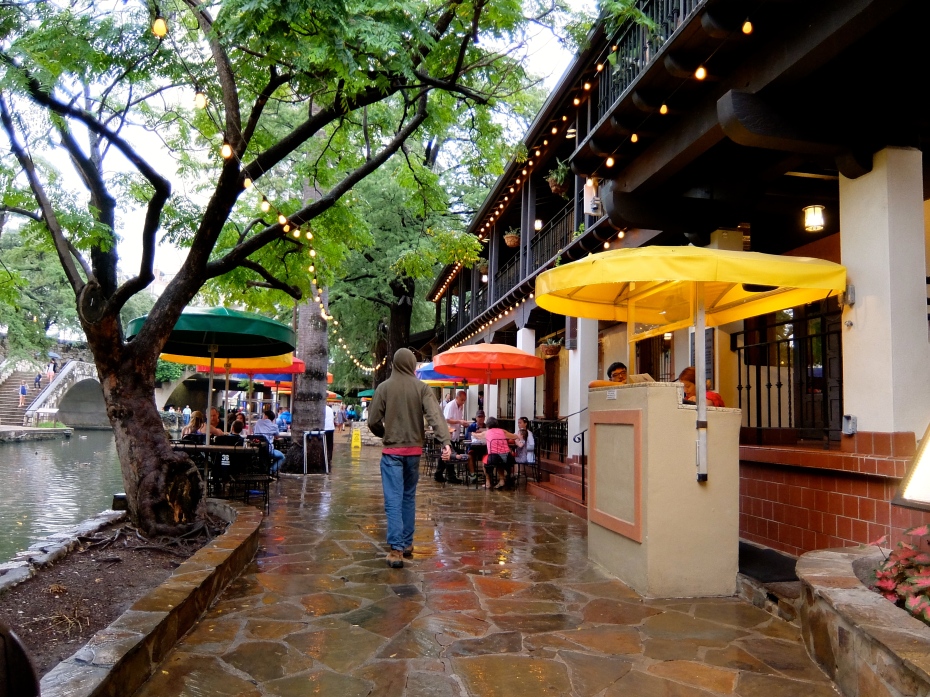 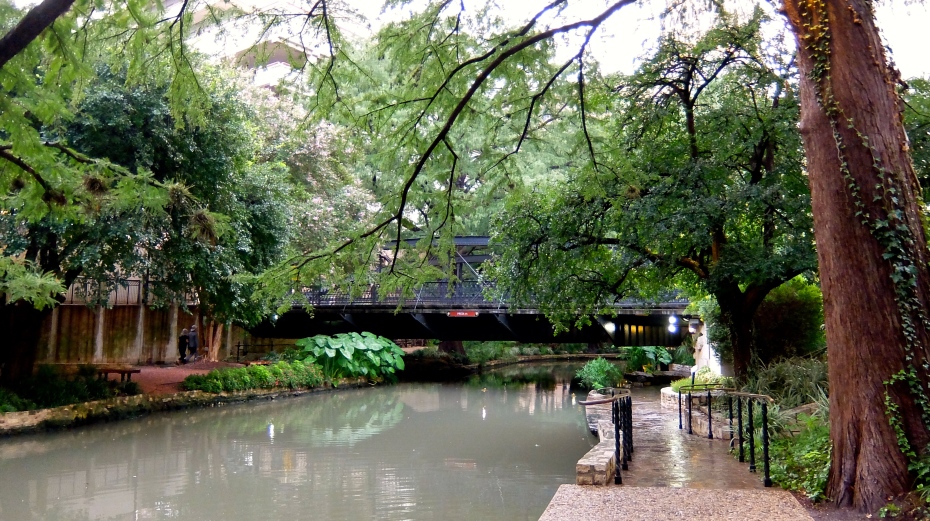 When the sun set, we headed over to get a look at the Alamo, which is within easy walking distance of the Riverwalk. Just based on what people had told us, we were pretty much expecting to see a crumbling ruin huddled in between a 7-11 and a Denny’s. Our expectations were wildly exceeded. The whole downtown area is completely gorgeous. 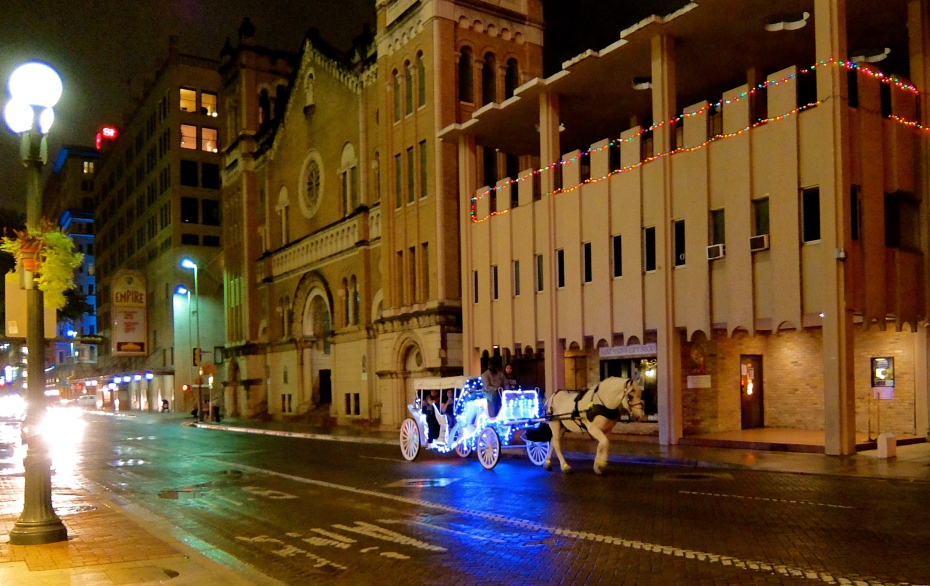 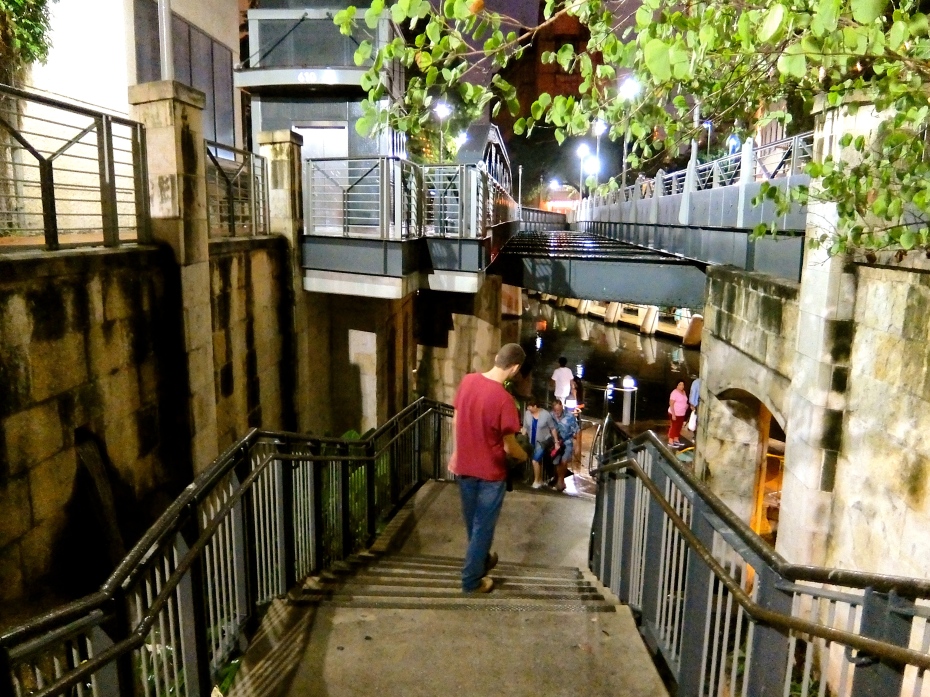 We had one more stop to make before we left San Antonio. I had lamented in the past that I miss California-style Mexican food, and that Tex Mex is much too spicy-hot for the kids and I to endure, much less enjoy. So a friend told me to check out Mi Tierra Cafe y Panaderia, which she thought we would like.

My method of navigation in unfamiliar places is to drive toward the nearest freeway (never far away in Texas cities), pull into the first McDonald’s or Starbucks I see (also never far away), and use their wifi to chart a course on my iPad. When I did this to search for Mi Tierra, I realized that we could have walked from downtown to the restaurant, if it weren’t after dark in a strange city. We could have walked there from the McDonald’s, for that matter, but the rain was starting to pick up again.

We cruised around the restaurant looking for a parking spot, and found a line of parking meters near this pretty mural:

I was just about to drop some money when I noticed that the operating hours ended at 6pm. Just to be on the safe side, I walked over to a police car parked nearby and asked one of the officers if I needed to feed the meter.

“It’s free,” she said cheerfully.”Catch all the Pokemon you can!”

Mi Tierra is located within a “Little Mexico” type mercado, a festive marketplace. Disappointingly, the shops were closed by the time we got there. But the restaurant itself is open 24/7, and it is wonderful. 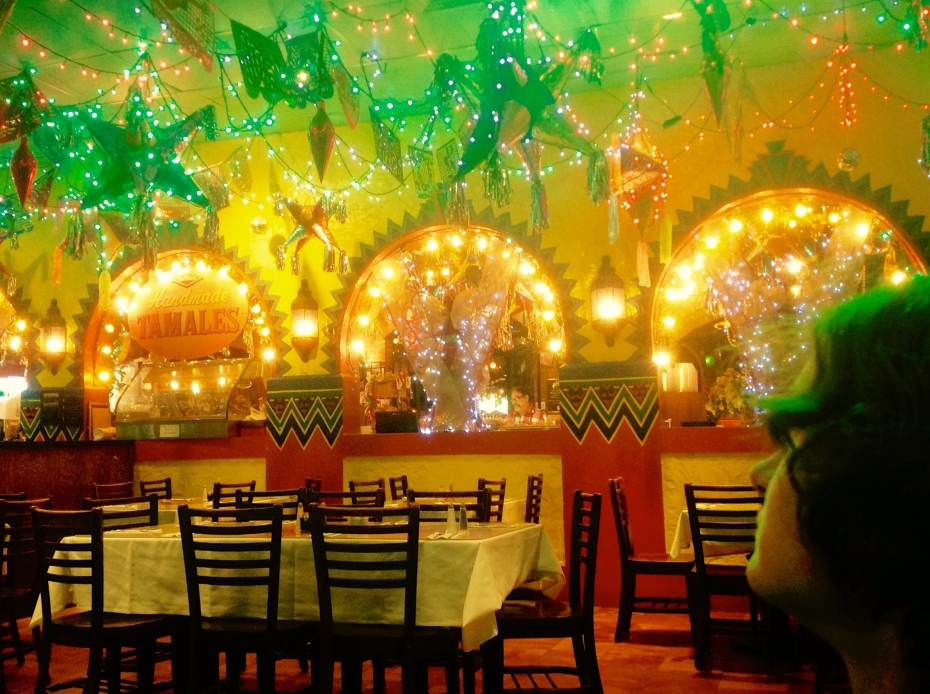 My friend was right about the food. It tasted like home.

I don’t have words for how much I loved the visit to San Antonio. It made my artist’s soul happy in a way that nothing else has since my last Christmas in California. I am thinking about moving down there after Luke graduates. Not even joking. I want to be a part of that city.

We drove back to the hotel in a happy haze, and passed out as soon as we got to our beds.

One thought on “Deep in the Heart of Texas (Road Trip, Part I)”