If I produced any artwork at all during my first year in Anza, I have no evidence of it. I’d been living among relatively normal people for the previous couple of years, and moving back in with my family was, um, a difficult transition for me. My mother had written to tell me that I must either move to Anza to financially assist them in their time of need, or I would No Longer Be A Member Of The Family And Also I Would Of Course Go Straight To Hell. Obviously if I’d known then what I know now I would have jumped at the opportunity to be free, but at the time I was still deeply enmeshed in the cult mentality I’d been raised in.

Also, Dani’s circumstances had changed; she and her husband and now two young sons had moved in with her husband’s parents, and while my dear friend had insisted that I be allowed to live there as well, my services as a nanny weren’t really needed anymore and I felt very out of place there.

So, me and Stormy moved up to Anza seventeen years ago, and we’ve been here ever since.

I’ve been debating with myself about whether or not to go into detail about my home life those first few years. I run the risk of looking as though I were exaggerating or seeking pity, because it was seriously like something straight out of a Roald Dahl novel. I’ve decided to put in the so-bad-it’s-funny stuff and leave out the so-bad-it’s-not-even-close-to-funny stuff.

My family had been living in Anza for about a year before I moved up; there were my mother, my younger brother, my older sister and her baby daughter, who was about two months old [edit: that’s incorrect, my niece was almost a year old] when I moved in. The baby’s father wasn’t in the picture.

They lived in the “permanent residents” section of a campground, in a camper about 28ft long I think. Built onto that was a creaking, lopsided, hideous room thing that they’d built themselves using, among other things, cannibalized parts from another trailer that they dismantled right there onsite. This addition was divided into three smaller sections: a “living room,” a tiny bedroom and a tinier bedroom. In the four or so years I was living there two other equally horrific structures were built onto the mess, altogether creating the ugliest, white-trashiest site in the entire campground, and believe me, that’s saying something.

I was given the tinier bedroom; it was six feet wide by ten feet long. The agreement was that I would get a job, give all my money to my mother “just until we got out of debt” and then pay a fair rent after that. I kept Stormy in the backyard of an elderly couple that had a property near the campground.

There was a gas fireplace in the living-room section of the addition, and there was something wonky about the way it was set up or vented or something, because in the winter when the fireplace was going there was always a fine layer of soot all over everything. It’s totally going to sound like I’m making this part up, but my mother used to keep a canary in a cage in that room, and they kept DYING from the fumes from the fireplace; she kept having to replace them. But would she ever consider the possibility that maybe air that could KILL CANARIES might not be completely healthful for the human inhabitants? Heck no, that would be SANE PERSON reasoning. Every time one of her canaries died she called it a “spiritual attack” from the devil.

You know what? Screw this. Never mind the backstory, let’s get to the artwork.

During my second year there I developed what I think of as my “coloring book” art style. I would draw detailed pictures in black ink, have a bunch of copies made at a local shop, then use felt markers to color them in. That way I could experiment with different color palettes and such. Those pictures were almost all fantasy genre stuff; at no other point in my artistic pursuits before or since was I ever less interested in reality. This was pure escapism.

A lot of my stuff from back then has been lost or ruined, but I do have a handful of the original uncolored pictures. Here’s a sampling: 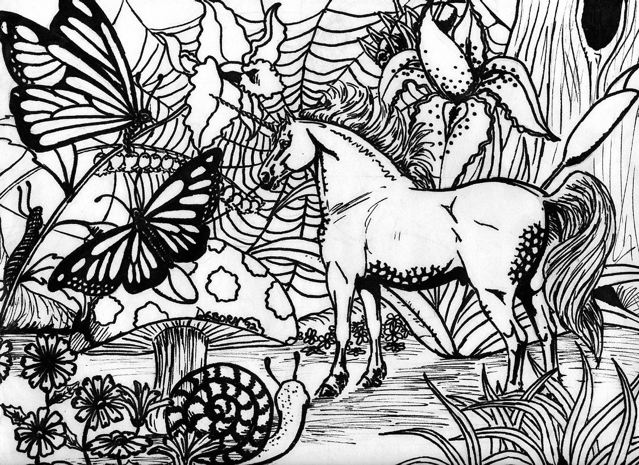 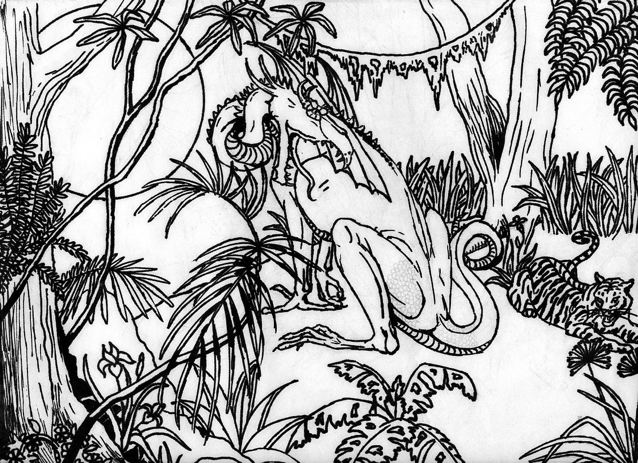 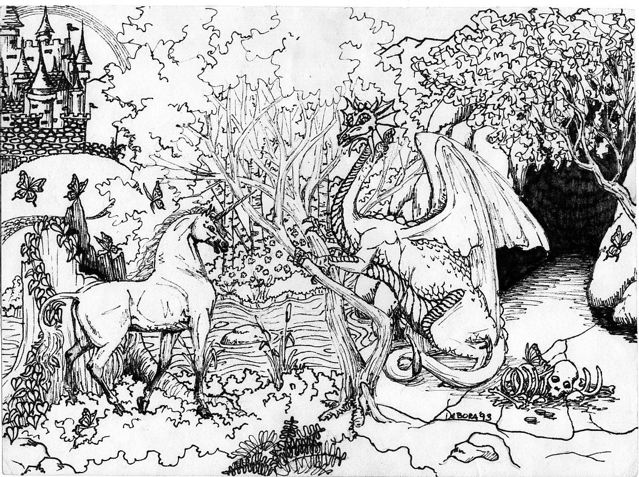