We stepped out of our tent the next morning into a world of impossible colors. Nature seriously cranked the saturation up to 11 that day. The sky was so intensely blue that the horizons looked like bad photoshops. 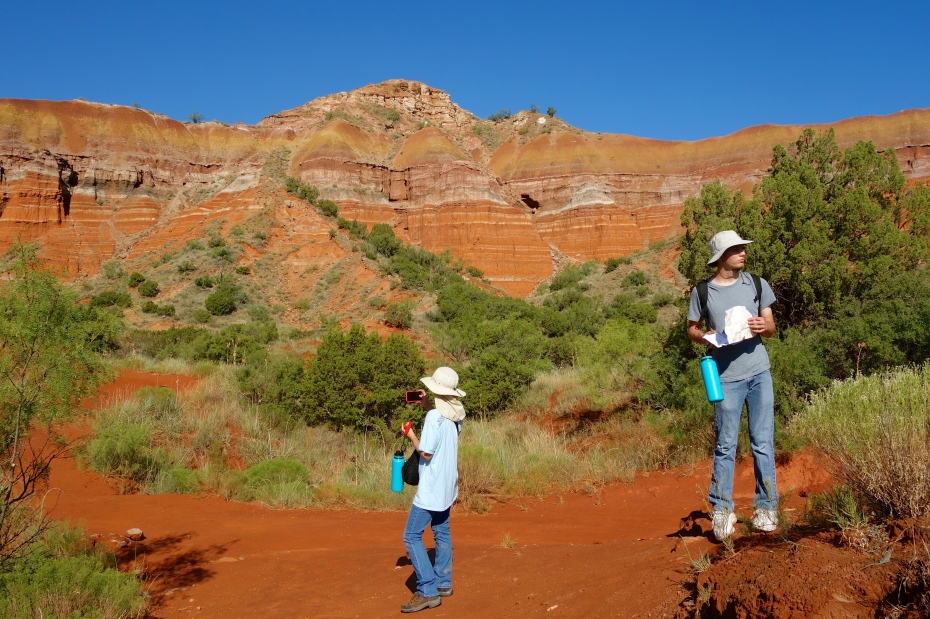 This “hoodoo” is one of the first notable rock formations you see on the iconic Lighthouse Trail. To me it looks like a muppet wearing sunglasses:

Lighthouse is an easier and more pleasant hike than Rock Garden, and has a much better payoff at the end. 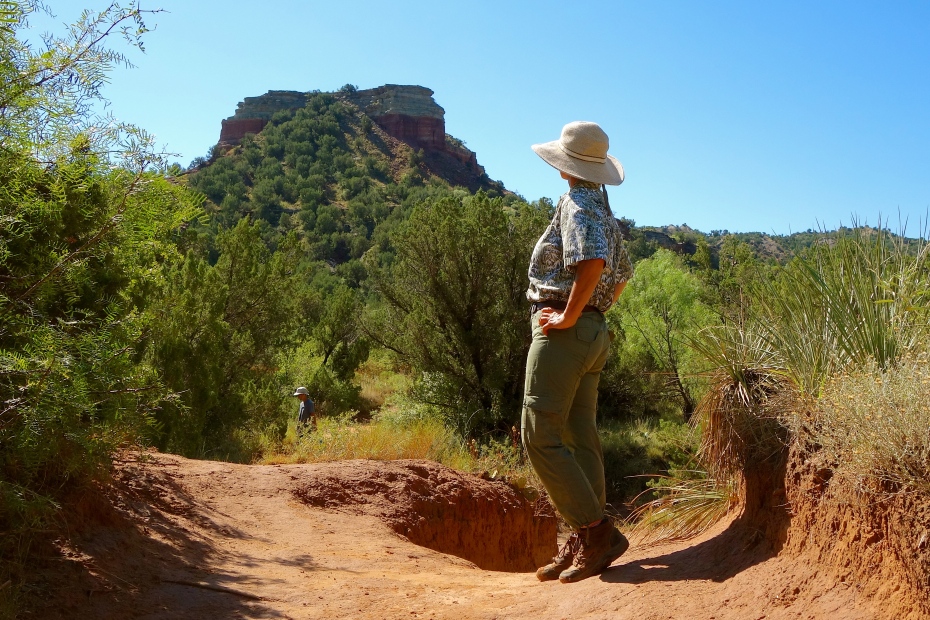 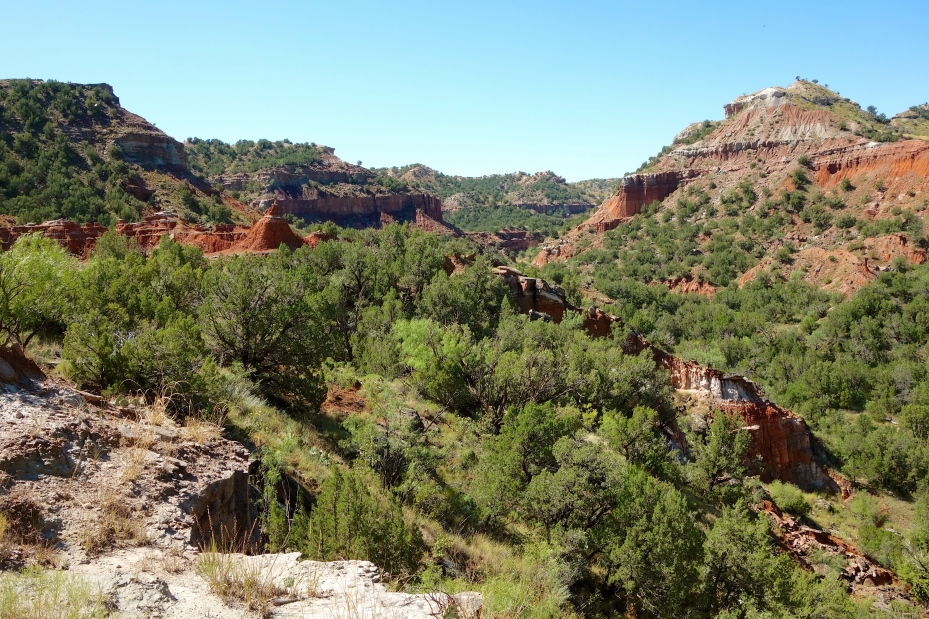 The mapped trail officially ends at a small clearing with a picnic table and a bike rack, some distance from the eponymous rock formation. From there, a few desire paths lead up from the clearing to the Lighthouse itself. This time we had accounted for the dry desert air and brought extra water, so we chose a path and kept climbing. This ended up being my favorite part of the whole trip. 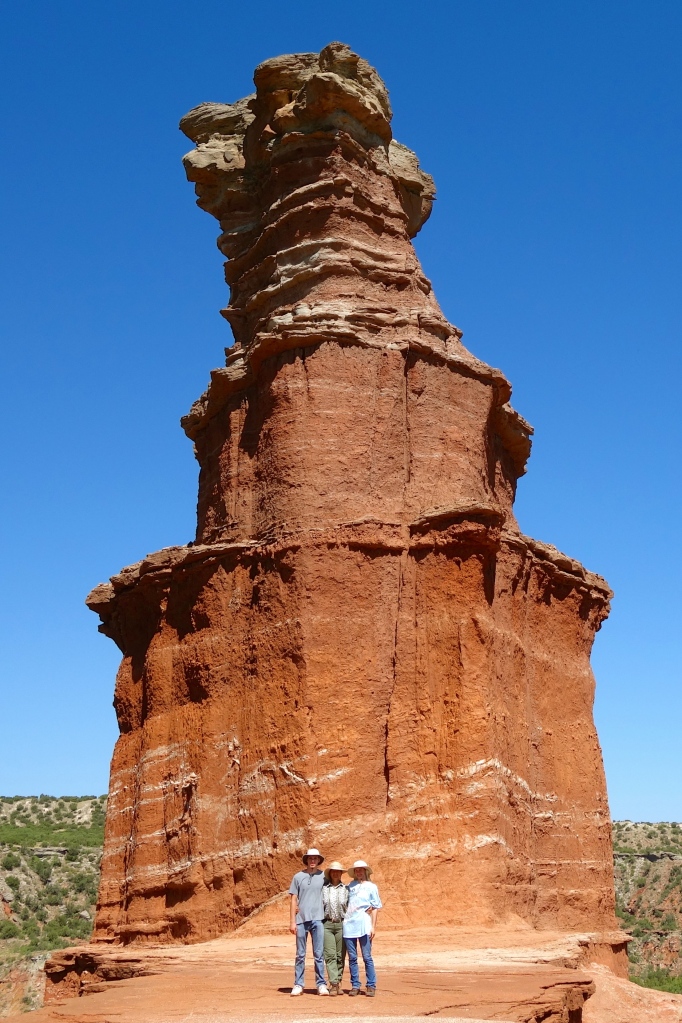 You can go a bit higher here and get some great views of the canyon. 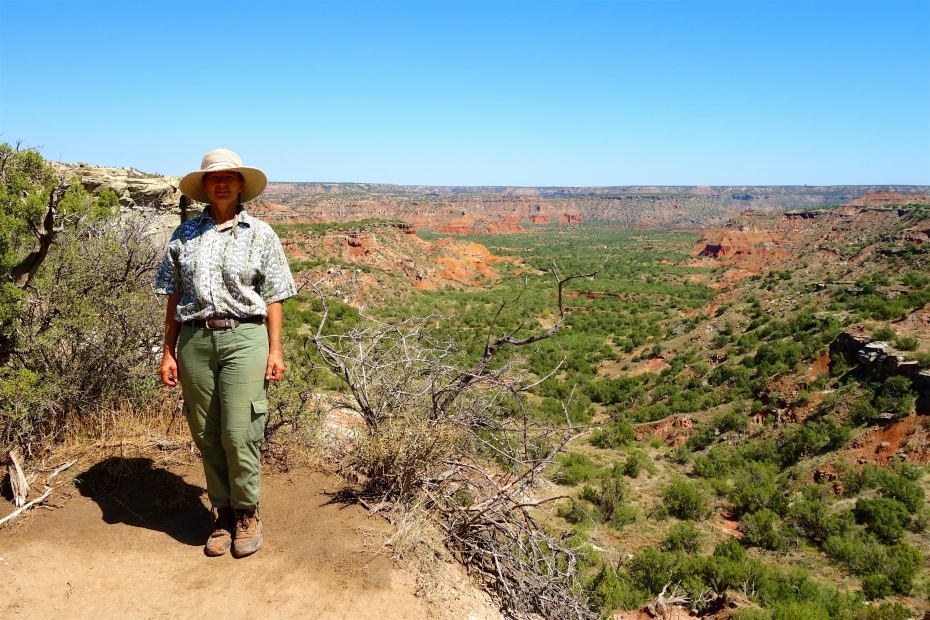 When we were ready to go back down we took a different, more direct path than the one we had come up on. 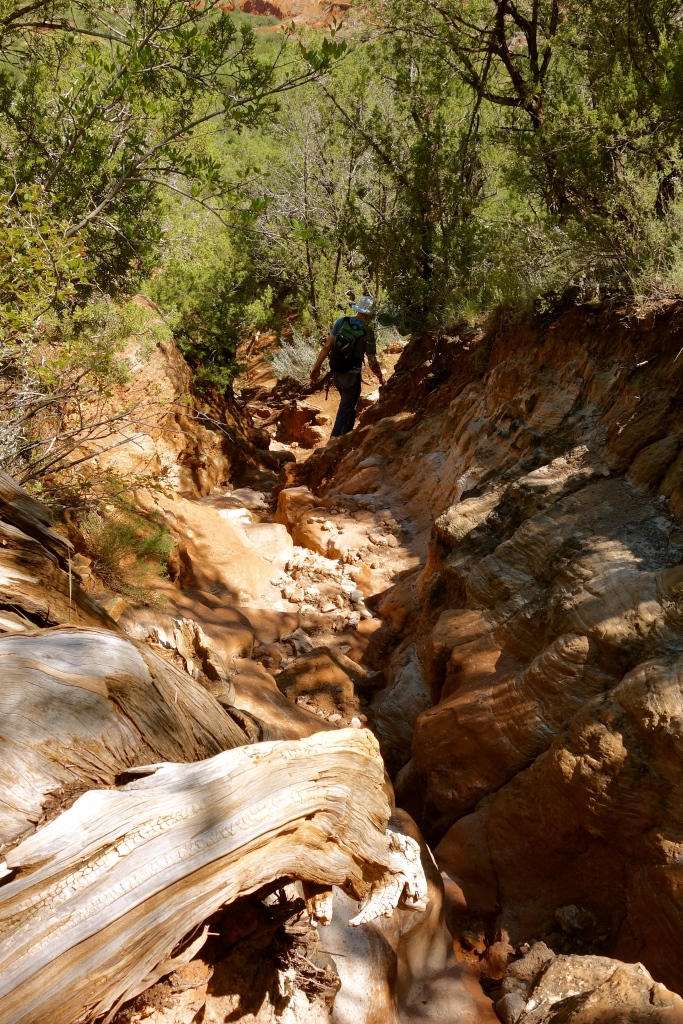 We reconnected with Lighthouse trail at the clearing and backtracked to the trailhead. 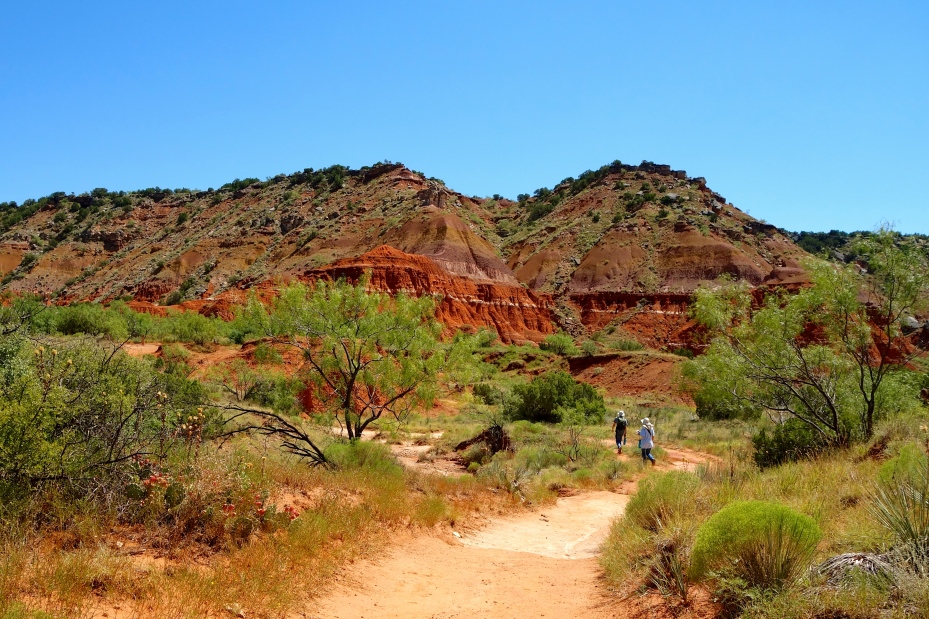 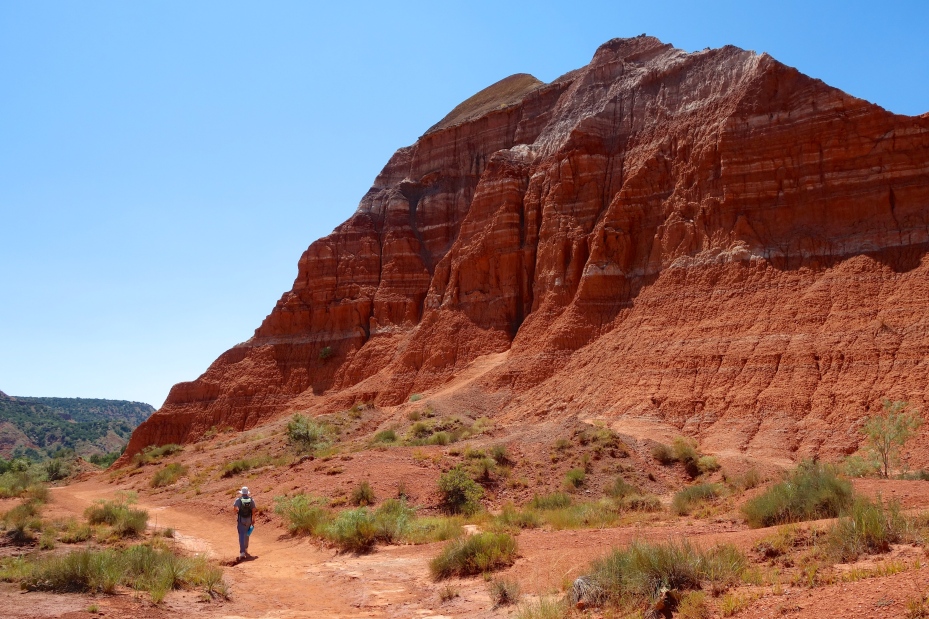 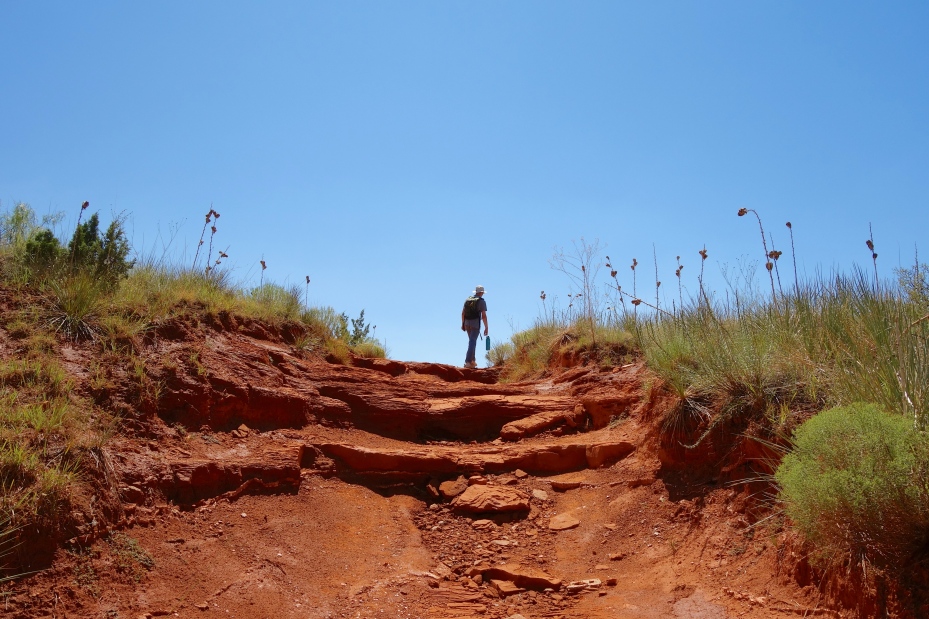 The only thing left on our Palo Duro to-do list was the Cave.

It’s not deep, but it’s a world of fun to climb around on. 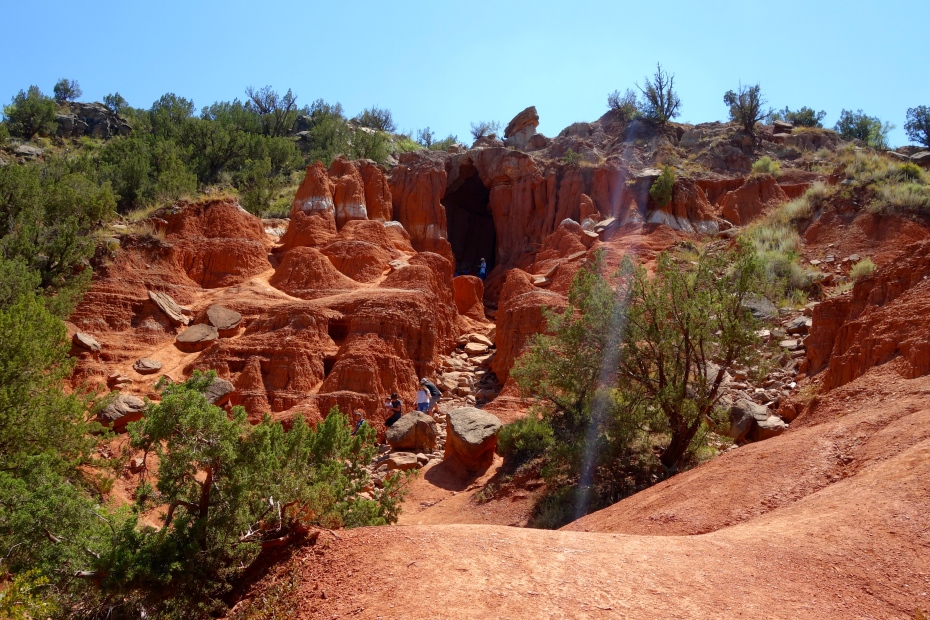 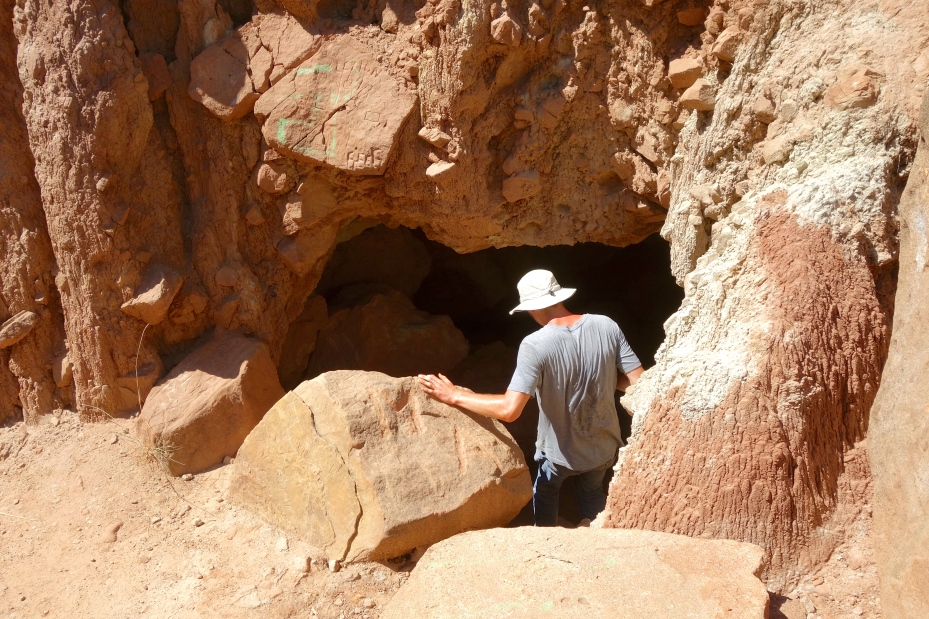 Once we’d worn ourselves out at the Cave, we treated ourselves to a surprisingly fresh and tasty supper of burgers, fries, onion rings and root beer floats at the park Trading Post. Then we returned to our campsite and called it a day.

We woke up early the next morning, broke camp… 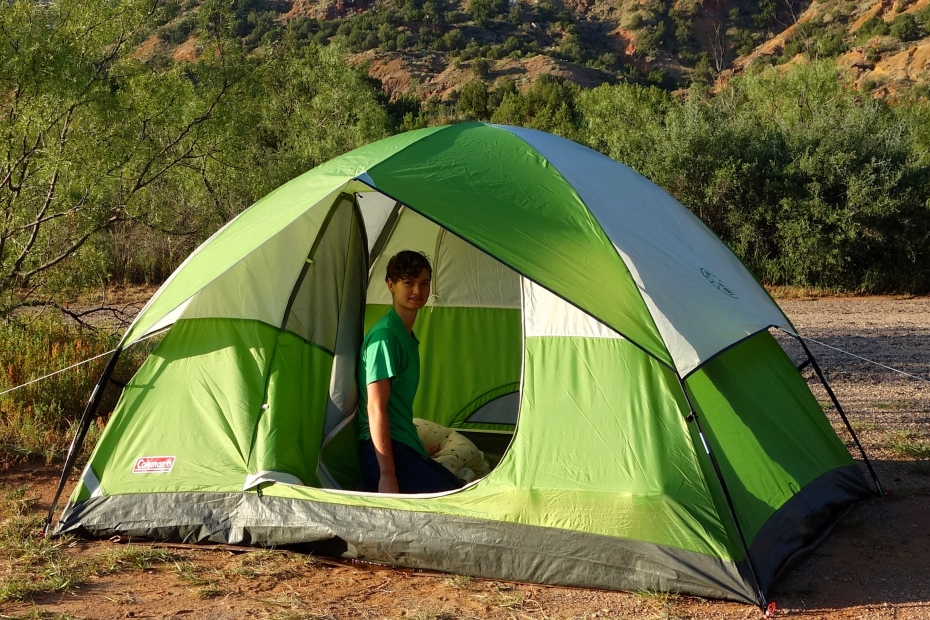 …and drove back up into the flatlands.

On the way home we got to see all the scenery that we had missed during our night-time drive out to the canyon. Still mostly just corn, cotton, cows and wind turbines, though. Our next home has to have mountains. We are not flatland people.

Since I’m apparently blogging again, I might post a few of my favorite Austin pics from the past year. Or maybe not; this might be my last post for another year, who knows. I’ll leave you with a few lines from Cohen’s “Anthem,” which is basically my theme song these days:

Ring the bells that still can ring

There is a crack in everything

That’s how the light gets in

That’s how the light gets in.

Palo Duro Canyon State Park and Other Stories, Part I

Fun fact – the second-largest canyon in the US is right here in Texas!

Full disclosure: I didn’t really expect to be continuing this blog. With Luke and Elizabeth both over 18 now and the custody issue no longer looming in the background, I’m less motivated to keep a public record of their good health and general wellbeing. But Palo Duro is too pretty not to share. 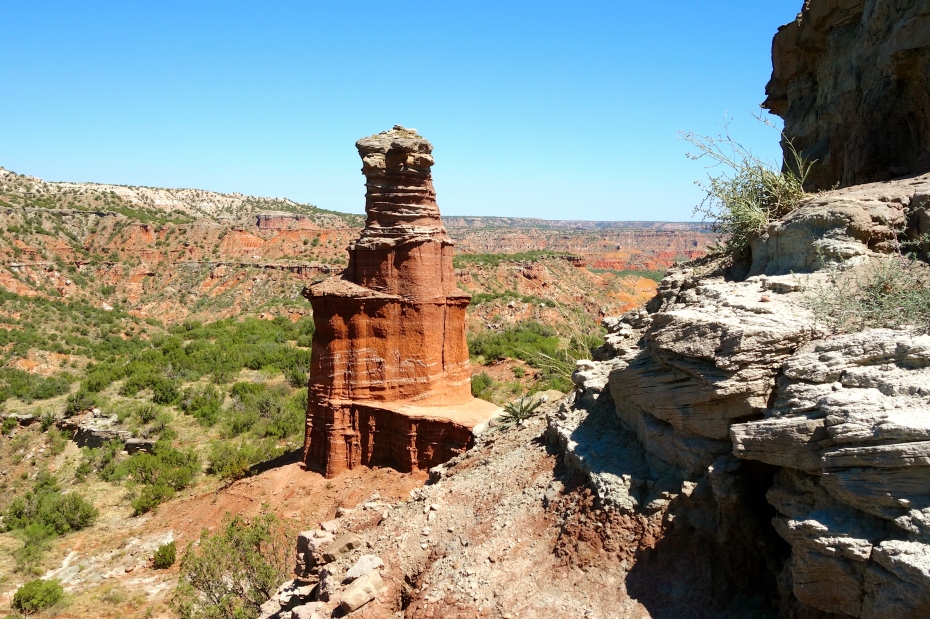 So, some quick catch-up: Austin has been good to us, I’m glad we moved here. It’s such a beautiful city. I don’t know if we would have been happier in San Antonio, but I doubt we would have found the same opportunities there. Maybe things really do unfold the way they’re meant to.

In an earlier post, I described living in DFW as “a slow death of the soul.” That wasn’t hyperbole; if we had stayed in Bedford we would eventually have lost ourselves, or lost everything of value inside of us. Living in Austin has given us back our sense of joy and our appetite for life. And ironically, we’ve become mentally and emotionally healthy enough here to recognize that Texas is not the right place for us to put down roots.

Albert Schweitzer once said, “In everyone’s life, at some time, our inner fire goes out. It is then burst into flame by an encounter with another human being. We should all be thankful for those people who rekindle the inner spirit.” I was fortunate enough to encounter two such people in Austin, at different times and in unrelated settings. Neither was from Texas originally, and both were on their way to better places, but I am inexpressibly thankful to have crossed paths with both of them. They reminded me that those kinds of people and those better places still exist in the world.

In a different post, I described my long journey to the realization that I needed to stop trying to heal broken people. That epiphany was certainly true, as far as it went, but I’ve since figured out that I had drawn the wrong conclusions from it. I thought the solution was to keep the broken people at a safe distance. But apparently if a person isn’t at least a little broken, I have a hard time relating to them at all. Like the Japanese art of kintsugi, it’s all about how they have repaired themselves along the way. Strength, wisdom, compassion, courage and humor make the best scar tissue. Other, less-noble materials can occasionally produce some delightfully interesting results as well. In all instances, the key to keeping these encounters enjoyable is to maintain rock-solid personal boundaries and to make no attempt at any kind of healing or restoration on the other person’s behalf. That’s their journey, not mine. I have my own kintsugi project to work on. 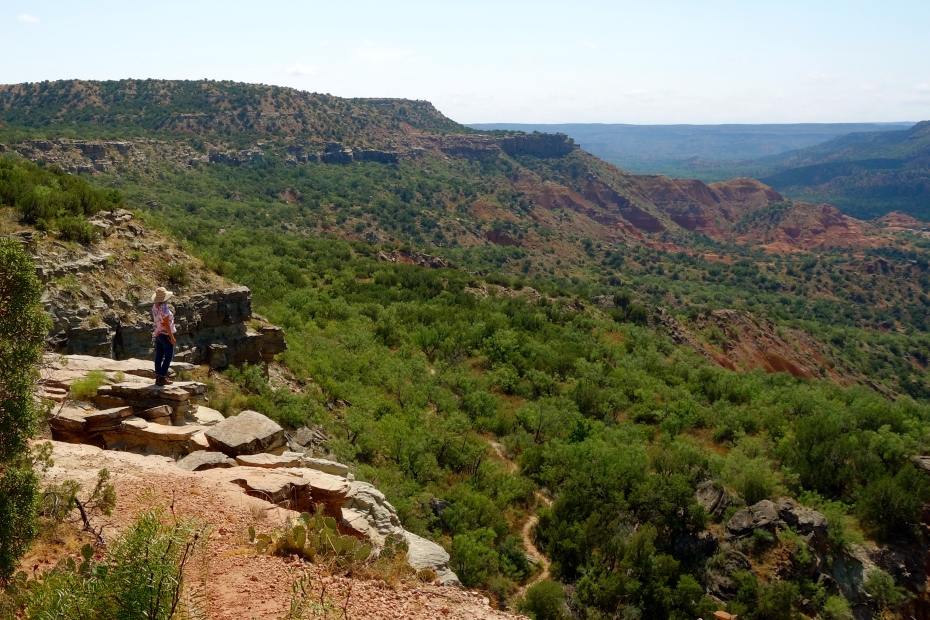 Luke and I have slipped the surly bonds of customer service and gotten regular weekday jobs, which has improved the quality of our lives by about a billion percent. Elizabeth is still working in the food industry, but she likes her current job well enough and she was able to request the Labor Day weekend off without too much trouble. When the big weekend arrived, we napped through the worst of the Friday afternoon and evening commuter traffic, and then rolled out of Austin at 12:30 a.m. Seven hours later the sun rose on a flat world of corn, cotton, cattle and graceful white wind turbines. Around 8:00 a.m. we arrived at Palo Duro Canyon State Park.

The canyon does not reveal itself until you are right on the rim. Its bluffs and spires and whimsical formations all sit beneath the surface of the surrounding flatlands, invisible from even a slight distance. Driving down to our campsite on the canyon floor, we got no real sense of the scale of it. We set up camp in warm morning sunlight, leaving the rain-fly off the tent to let the clean desert breeze drift through, and took another short nap to catch up on missed sleep.

Rock Garden Trail is billed as Palo Duro’s “most difficult and most scenic hike,” with “the best views of the canyon,” so naturally that was first on our list. It certainly is a pretty hike. 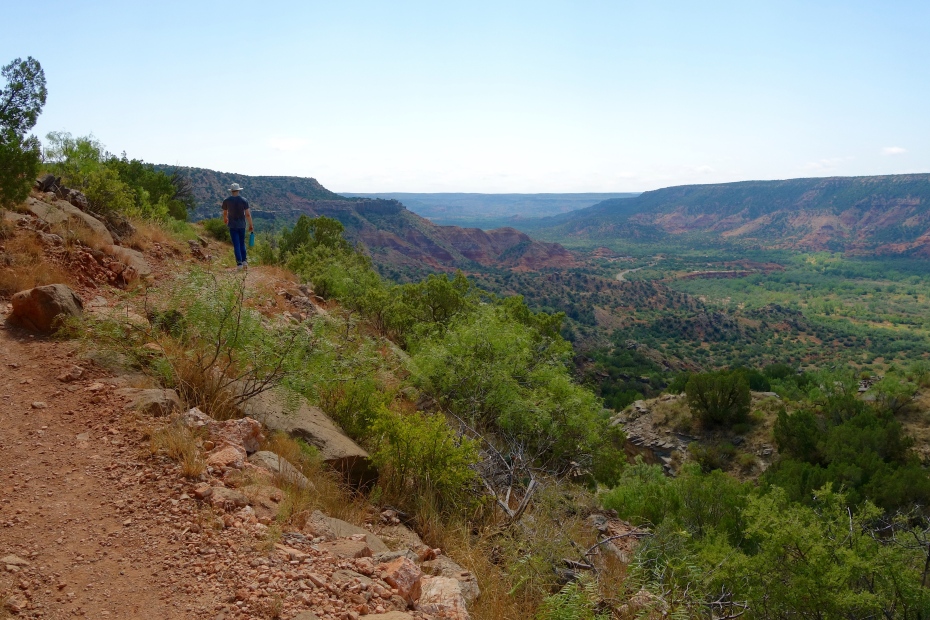 But Rock Garden Trail’s best scenery is on the way up. The vista from the top is, in our opinion, rather underwhelming. It does connect with a rim trail at the top that probably leads to better views, but by then we were running low on water and had to head back down. We still hadn’t gotten a really good look at the canyon, and we were starting to wonder if Palo Duro were overhyped.

Back at camp, we checked our park map and found a main overlook right off the paved road near the park entrance, so we drove up to have a look. That finally offered the view we’d been looking for. 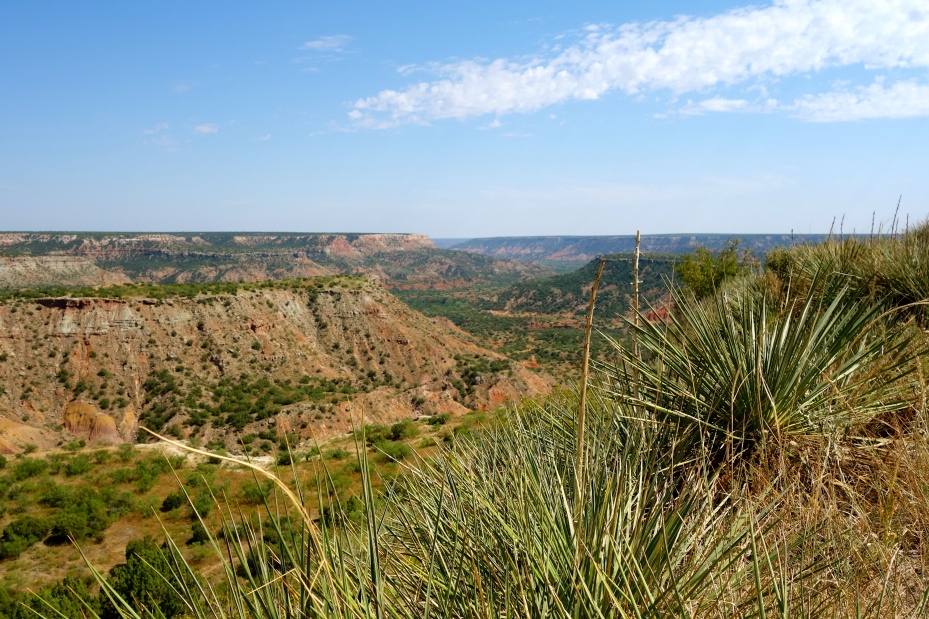 There is a visitor’s center with big windows and a telescope, which gave us a rare glimpse of an Aoudad sheep in the far distance. If my camera lens and the telescope lens could have played more nicely together, this would have been a postcard-worthy shot:

On the drive back down to our campsite, we found another nice overlook.

We stopped to check out an old cowboy dugout, a remnant of the canyon’s cattle ranch days.

By then we were getting tired, so we headed back to camp and settled in for the evening. Nightfall brought us a slender crescent moon and the faint splash of the Milky Way across a glittering wealth of stars. Lightning flashed on the horizon, and we debated whether to enjoy the starscape or put up the rain fly just to be safe. After some debate, we decided to put up the rain fly.

That turned out to be the right call. We were awakened in the middle of the night by crashing thunder, howling winds and an absolute deluge of rain. I can’t even imagine how miserable that would have been with no rain fly.