After puttering around the parks and foothills for three weeks I was eager to get up into the actual Rockies, visit one of Colorado’s picturesque little mountain towns and maybe summit a peak or two. I would love to see Ouray, but I’m not quite up for the six-hour drive to get there just yet. For my Labor Day weekend outing, Breckenridge was a more accessible choice. Elizabeth came with me. Luke wasn’t feeling a peak-scaling expedition this time.

I expected traffic to be awful heading west out of Denver into the mountains, and it was. What should have been an hour-and-40-minute cruise ended up being closer to two-and-a-half hours. But the views are so pretty, we enjoyed the drive anyway.

It was nice to get out of the Denver haze and up into the blue skies. We even pulled out into a turnout to admire an overlook view of the Dillon Reservoir.

We didn’t really know what to expect in Breckenridge. We had a vague, flexible plan to find some public parking near the scenic downtown and then just walk around and see what there was to see.

Parking was easy to find. And the Breckenridge magic started right away –– we saw gondolas suspended over the lot, heading up to some unseen alpine destination. 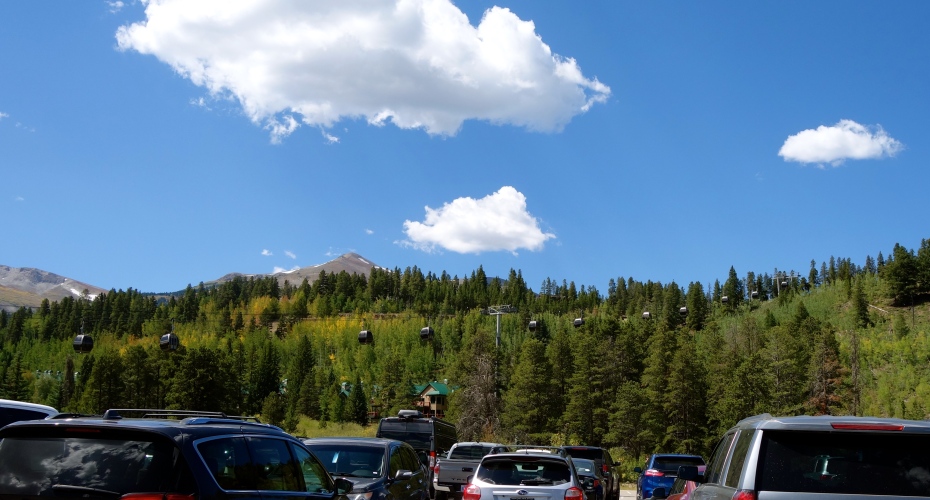 We asked around and found out that the gondolas are free to ride, so naturally we got in line. In retrospect, I’m amused by the fact that we never asked where the gondolas were going. It didn’t even matter; we’d just find out when we got there.

There are a total of four gondola stations on the line. We stayed on all the way to the top. 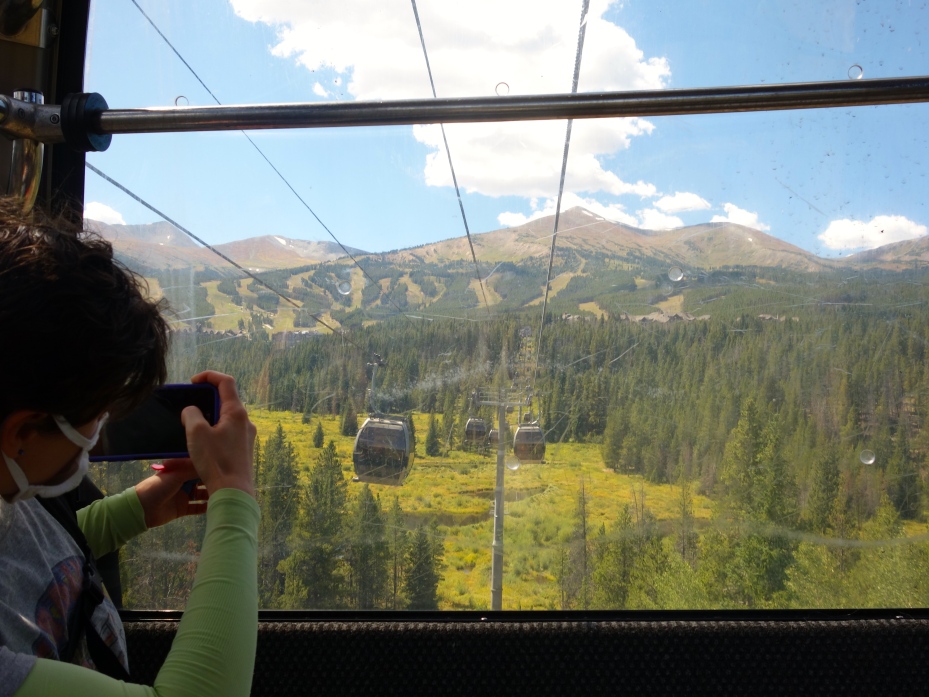 We disembarked at Breckenridge Ski Resort, which offers year-round activities. After grabbing some lunch at the Ski Hill Grill, we made a beeline for the Alpine Slide.

We took a ski lift to the top of the slide…

…and then rode little toboggans-on-wheels back down the slope. Wheeeeeeeeee! 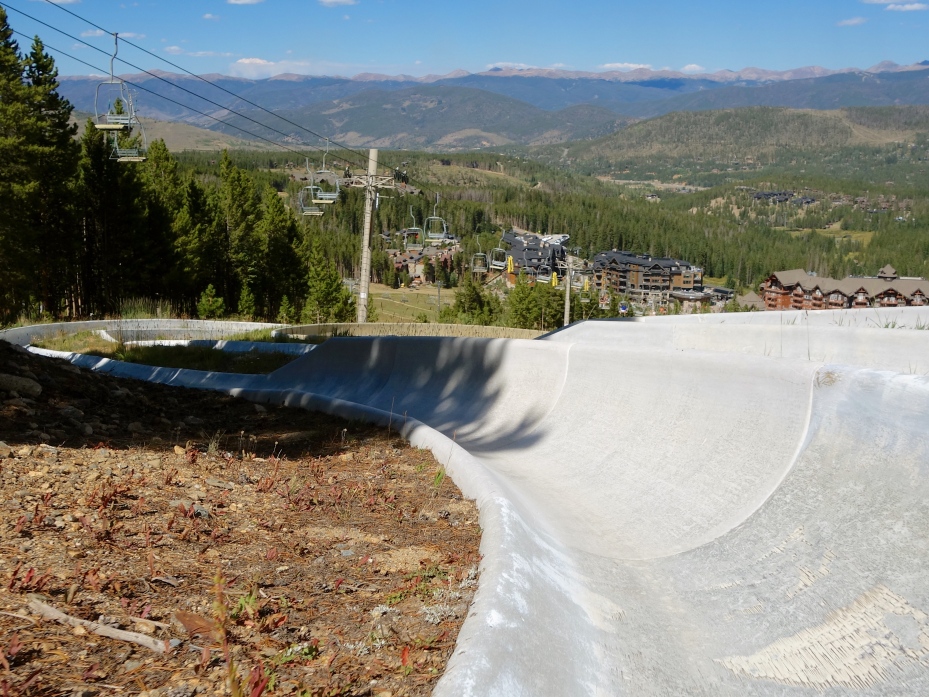 By then it was mid-afternoon, and we wanted to settle the question of where we would be camping that night. We asked a resort employee about dispersed camping nearby, and he cheerfully gave us directions to his own favorite area, up in the National Forest above a different resort. I made a note, and we headed back to the gondolas.

I accidentally got off one station too early. Stayed long enough to snap a pretty pic and got back on.

Elizabeth wanted to check out the High Line Railroad Park, so we drove there next. The museum part is currently closed for Covid, but we did enjoy looking at the old vintage train cars and engines.

This monster is a rotary snowplow, used for clearing heavy snow off of the tracks.

And my favorite part –– the park is near the trailhead of Trollstigen Trail, which led us to Isak Heartstone, the Troll of Breckenridge. 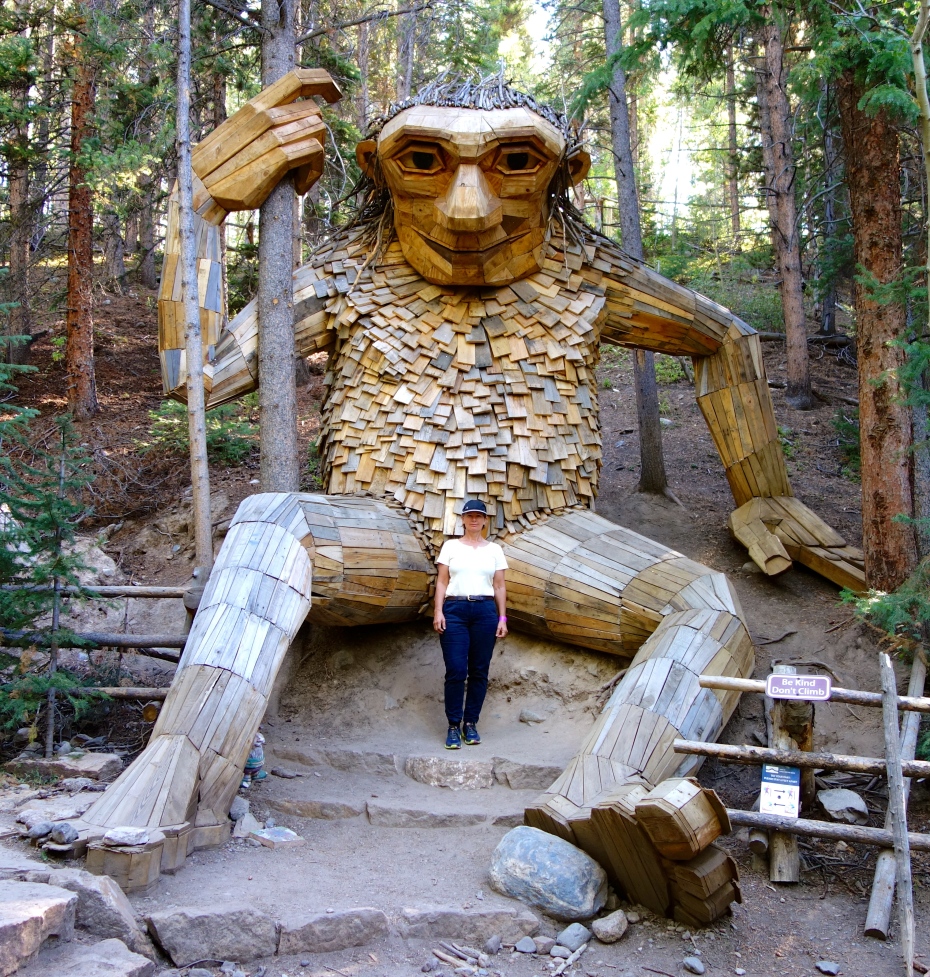 It’s a short, pretty path, definitely worth the detour.

The shadows were getting longer, and we didn’t want to be setting our tent up in the dark. We stopped by a local eatery for soup and bread to go, and then drove up to the area the resort guy had recommended.

It was pretty up there for sure, but we had a hard time finding any ground flat enough to set up a tent on. After driving a backroad loop that my car was not designed for, we circled back and stopped to talk to an employee of the nearest resort about where we could camp. He recommended near the river, but said that really anywhere was fine.

Long story short, we finally found a flattish spot to set up camp with a nice view. And with all of the care we took to follow the advice of the locals, we still got a visit from a ranger the next morning, telling us that we had set up our tent in a no-camping zone and would have to relocate. Clearly there are rules that we must learn. I’m not going to post any pics of our campsite, because I don’t want to encourage anyone else to camp there.