Travelling to the South, Part III

When you love to see new places but work in retail, you get pretty good at traveling on a shoestring budget. Most of what we eat and drink on our road trips is brought with us in a big cooler. But if someone recommends a particular shop or restaurant, we’ll usually include it as part of the general experience. A friend recommended a place in Austin called “Juan in a Million” for breakfast tacos.

Tangent: on last year’s road trip we fell head over heels in love with San Antonio. It’s still at the top of our list of potential places to move to after Luke turns 18. Shortly after we returned home from that trip, I went to r/SanAntonio and asked the locals what they loved or hated about living there. The responses immediately degenerated into a heated argument about where to get the best breakfast tacos. I’ve since learned that there’s a semi-friendly rivalry between Austin and San Antonio regarding which city has the best breakfast tacos. Breakfast tacos are apparently Serious Business in south Texas.

Driving from our hotel to Juan in a Million brought us through parts of the city that took some of the shine off of Luke’s wide-eyed wonder. They looked fine to me, but I spent a lot of my childhood and teenage years in downtown Riverside CA in the 1980s, which people tell me was a rough and dangerous time and place to be. To Luke’s eyes, the urban outskirts of downtown Austin looked slummy and unattractive. When we reached the charming Hispanic neighborhood where Juan in a Million is located and Luke said it looked “low-income and run-down,” I realized that my next duty as a parent is to broaden my kids’ horizons in a new direction. I’ve been so focused on trying to show them the shining best of what humanity can accomplish, I’ve neglected to teach them about the pleasures and realities of average inner-city life.

Juan in a Million is great. We were seated in a breezy screened patio that had been built onto the surrounding structures in a way that retained the outdoor vibe. Food and service were wonderful.

After breakfast we drove back to Zilker Park to pick up the trail loop where we had left off on Monday night. The drive took us through more areas of the city that Luke found lacking. I guess the “weird” aspects of Austin aren’t for everyone.

We parked near Barton Springs and walked downstream to connect with the hike-and-bike trail loop where Barton Creek flows into Lady Bird Lake.

Before long we came to Lou Neff Point with its pretty stone overlook. 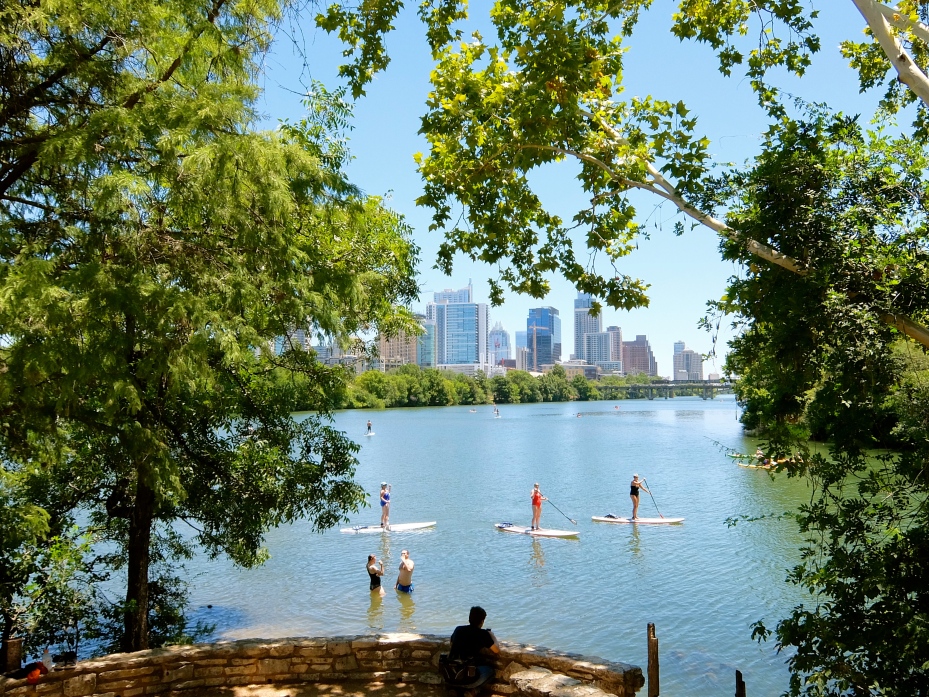 We continued up the hike-and-bike trail, which gets less parky and more woodsy as you go.

You know those old prison movies where the rebellious hero inevitably ends up roasting in a metal box out in the hot sun? That’s what these metal restrooms reminded me of:

The trail crosses the river/lake at MoPac Expwy and circles back along the other bank.

We had planned to follow the trail at least back to Congress Ave before looping back to the car, but we got as far as the pedestrian bridge next to Lamar and kind of all decided at once that we had walked enough. It was getting hot again.

On the city side, the pedestrian bridge offers stairs for pedestrians and a spiral ramp for bicyclers. Of course we walked up the spiral.

The “power plant” fascinated Luke. He could tell at a glance that it didn’t seem to be in operation, and he wondered what sort of power it was generating and how. 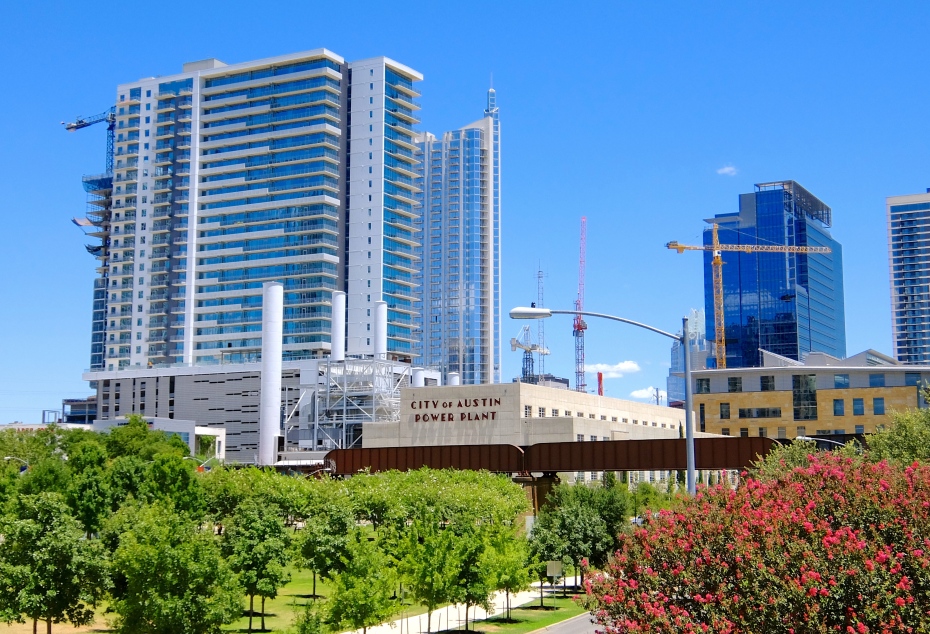 As I write this blog post, I have googled info on the building and found that it is in fact no longer in operation as a power plant, that it is now a historical site and a multi-use structure. There you go, Luke.

The pedestrian bridge is lovely. The view from the top:

We crossed back over and returned to the car.

At that point we had to make a decision about whether to start the journey home ahead of commuter traffic, or commit to remaining in Austin until after the rush. We decided to stay.

Luke “collects” libraries, and the biggest one in Austin is at the University of Texas, so that was our next stop. Views of the University from the top of the parking garage… 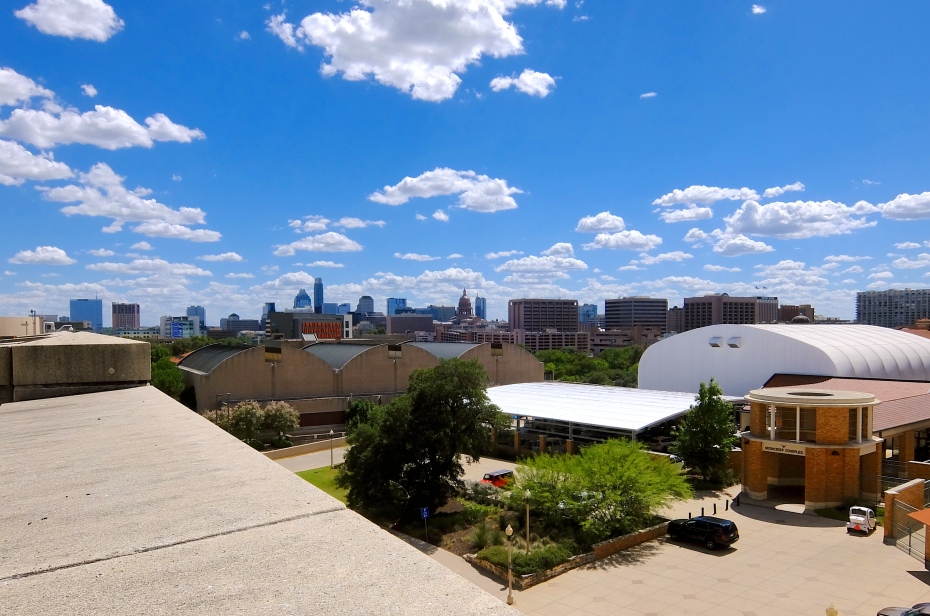 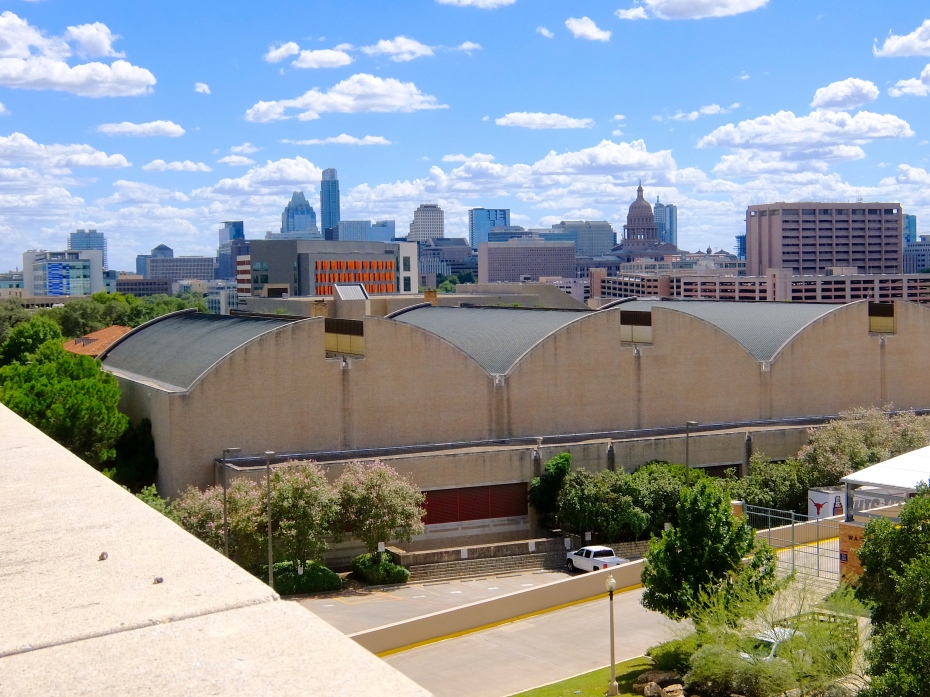 …and the infamous clock tower viewed from near the library. 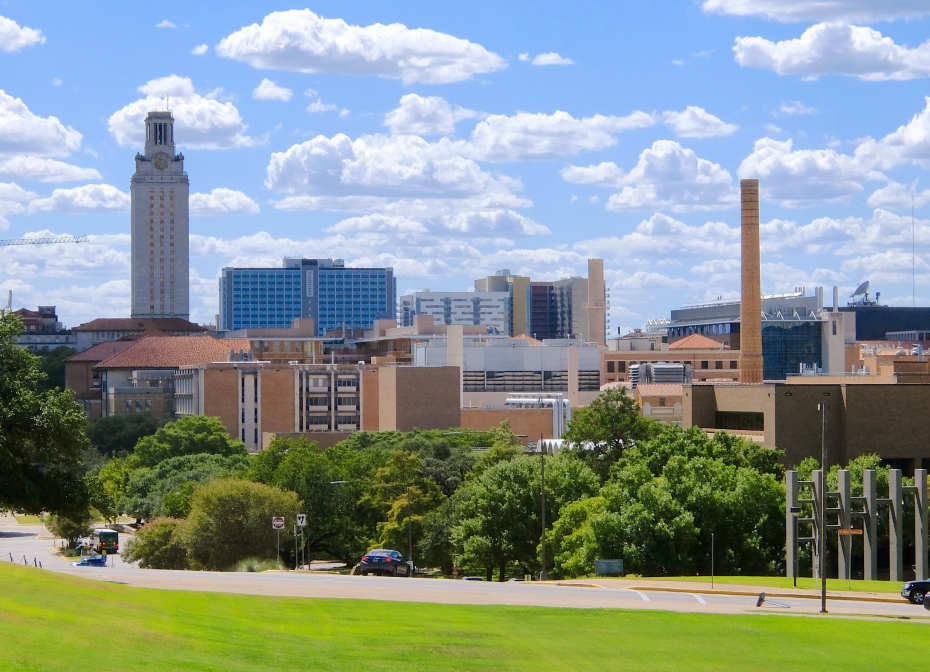 We were stopped at the entrance of the LBJ Presidential Library and told that it is only accessible by appointment and costs $10 per adult. Wtf? We asked if there were other, more visitor-friendly locations on campus and were directed to a small Texas history museum next door. If I had done more research before the trip, I would have learned that there are like a hundred libraries on that campus and almost all are free and open to the public. Thanks, unhelpful door guy! I’m going to be honest here, the few people we interacted with in Austin did not make a good first impression. The exception to that was some workers at Zilker Park who cheerfully called out to us as we were about to put money in the parking meters and told us that parking there is free on weekdays. I paid the good deed forward by stopping three other people from putting money in the park meters over the course of our three-day stay. In general, though, Austin seemed to be seriously lacking in the Texas friendliness that I’ve always liked so much.

Anyway, we wandered through the tiny museum and then gave up on the University and headed over to the flagship Whole Foods on Lamar. This is the original Whole Foods location, with corporate headquarters occupying the upper floors, a full-service restaurant inside the store and lots of special extras. I liked the living tapestry:

We wanted to explore the rooftop patio area, but the day was getting oppressively hot. It seemed like a good time to try that mochi stuff we’ve been seeing around lately. If you haven’t seen it, mochi is a Japanese dessert, basically balls of ice cream wrapped in a sweet rice dough. We picked out a bunch of different flavors and took them up to the roof. 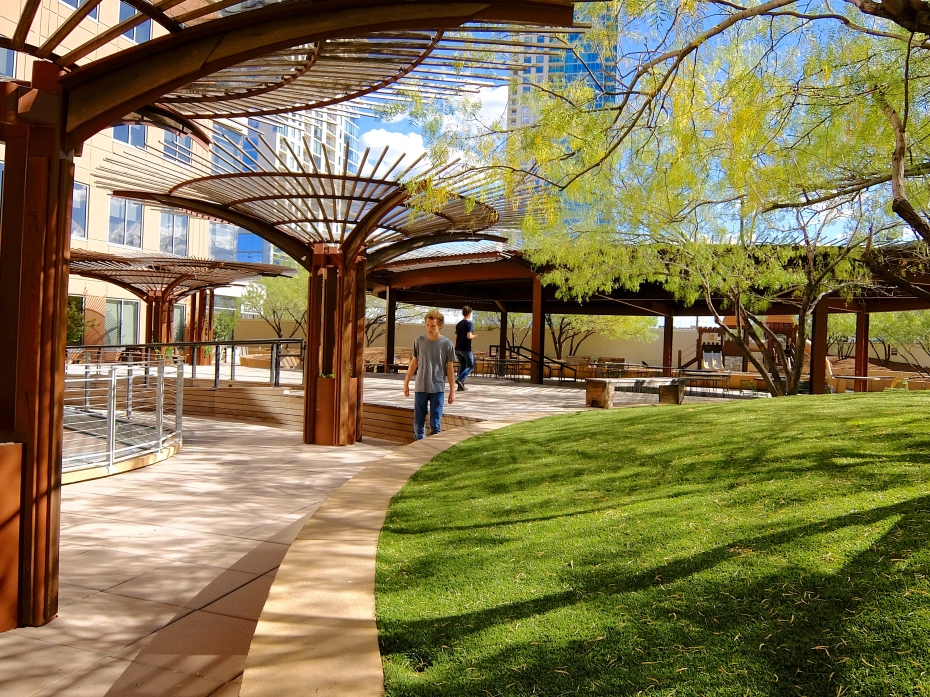 My verdict: the ice cream is delicious, but I’m not a fan of the rice dough. It tastes raw and gluey to me. Loved the patio, though.

We still wanted to add an Austin library to Luke’s collection, so we googled “best library in Austin” and drove to the branch that was highest on most of the lists without being prohibitively far away.

All I can say is that this branch either paid to top those lists, or it offers services that go far beyond what is visible to the eye, or the reviewers are trolling en masse. It is a tiny, dreary, uninspiring library. Elizabeth found a place to sit with her laptop in the children’s section while Luke explored what little there was to see. She was immediately asked to leave the children’t section for being “too old to be in there.” Seriously, wtf?

No longer trusting reviews, we decided that the main central branch might be a safer bet. By then the commuter traffic was starting to get problematic, so we got to the central library as quickly as we could and settled in for the duration.

The central branch was…better, but that’s a low bar. Luke liked it because it’s four stories high and the third story is full of the informative non-fiction that he’s into. I found the decor (or lack thereof) to be depressingly drab and industrial. We all agreed that for whatever reason, Austinites do not love their public libraries and put no effort into making them cheerful or inviting.

We started the trek home when the library closed at 8pm. Getting home took over an hour longer than the drive down, because all of the traffic horror stories we had heard were rolled into one long stop-and-slow clusterfuck on I35 N.

We loved our visit to Austin, but ultimately decided that San Antonio is probably a better fit for us. Deciding factors include cost of living, traffic issues, a rather unfriendly social vibe and a straight up depressing library system.

2 thoughts on “Travelling to the South, Part III”