On my way home from the POP thing yesterday, Michelle called my cell to let me know that Luke and Elizabeth were safe and sound at her house. They had just returned from camp. I asked to speak to them.

“BECAUSE I MISSED YOU SO MUCH!!”

That night as she was taking her bath she kept calling me in to tell me stuff about camp, so finally I just got comfy on the bathroom floor and let her chatter away. This is unusual behavior for my taciturn girl, so I enjoyed the heck out listening to her talk and talk.

Her camera had literally hundreds of pics on it.

[EDIT: Most of the images I originally posted here have been removed, in consideration for parents who may not want pics of their kids posted on my blog. There was only one other girl shown that I had previously been given permission to feature here, so it seems safest to remove the rest.] 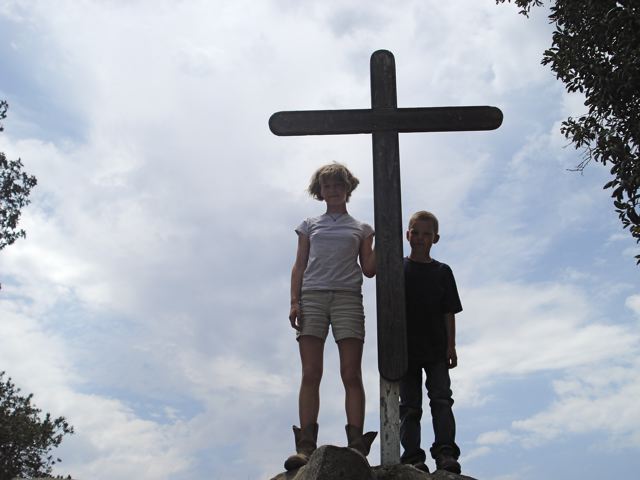 That blue thing she’s holding in that first pic is a Pokémon named Dialga. One of these days I will post another entry of Camp Wynola as seen by Dialga.

Elizabeth had a grand time.

Luke had a different experience.

When I first picked him up from Michelle’s he was quiet, subdued. “They didn’t take us to the gold mine,” he told me. “They didn’t mention it at all.”

The gold mine had been Luke’s primary reason for wanting to go to Camp Wynola.

He said he hadn’t gotten along with his cabinmates, so they’d moved him to a different cabin, but the boys there were no better and also made gross fart jokes.

“That’s what boys do,” I told him. “You’re a boy too, you’re supposed to think fart jokes are hilarious.”

“You should try to be more agreeable with people. The world’s full of all different kinds of people, you shouldn’t expect everyone to behave a certain way. Just go with the flow now and then.”

As the afternoon progressed Luke went from subdued to irritable to actively antagonistic. Nothing I said or did seemed to help.

This morning I reminded them that Steve was going to call around 9am so that they go go see him. Luke said he didn’t want to go. He was acting more hostile than ever, and I thought maybe this black mood was connected to Steve somehow. So I sat them both down and told them that this was an important visit for them. Now was the time for them to talk to their dad about how they felt about spending every other weekend with him, while he was still in a listening frame of mind. I encouraged them to have a real, honest-to-goodness conversation with him and make their own feelings and needs known.

They were at Steve’s house for a long time, several hours. While they were gone I suddenly realized that there was something tangible I could do for Luke. I hopped online, looked up the gold mine in Julian and learned that it’s open daily for public tours. Problem solved.

When Luke and Elizabeth came home they were talking about Steve’s new Pacman game and the new bike he’d promised to buy for Elizabeth and the upcoming trip to Knott’s for Luke’s birthday. Apparently Steve is back in Dad Mode. I can’t help but wonder how long it will last this time.

There was a subtle shift in both kids’ behavior after the visit, an undercurrent of something faintly negative toward me. I was at a loss. I told Luke about my idea to go to the Julian gold mine, just the three of us, and he got very excited and then angry at me because we can’t go, like, tomorrow. I did not know what to do or say or even what the real problem was.

Later I wandered into Luke’s room where he was recreating the dump scene from The Brave Little Toaster with scotch tape-and-construction-paper models. He was distant, uninterested in conversation. I flopped down on his bed and just watched him play.

At one point he took out his pocketknife and began sharpening a colored pencil with short, steady strokes of the blade. I’d never seen him do that before, and I was suddenly reminded of watching my father sharpen pencils that way when I was a kid.

“We have pencil sharpeners,” I commented.

“This is the way my dad sharpens pencils,” he said, and there was a faint but unmistakeable note of warmth in the way he said “my dad.”

If Steve makes them love him and then loses interest in them again he will be officially not human.

Later tonight we watched an episode of Star Trek and the kids sat uncomfortably far away from me.

Halfway through the show something clicked in my head.

When the episode was over I had a longish talk with the kids. I explained to them that even though their dad and I see the world in very different ways and will probably never be friends again, that has nothing to do with our relationships with them. They must never feel like they have to choose between us, that they can only love and be loyal to one of us. Love doesn’t work that way: there’s always enough to go around. I assured them that they aren’t being disloyal to me by loving their dad, and they aren’t being disloyal to him by loving me. There are no “sides” here as far as they’re concerned, just a couple of kids with a mom and a dad that they’re allowed to love freely with all their hearts.

And just like that, the air was cleared. Luke glommed onto me, back to his old affectionate self again. Elizabeth hugged me tight and said she loved me SO MUCH. We were good again. Back to being a family.

I swear, if Steve goes to all the effort of bonding with them and then ditches them again when the next new thing comes along, it will be the cruelest thing he has ever done in a lifetime of cruel deeds.

That’s out of my hands, though. Right now It’s just good to have my kids back and happy.

Just a teeny break, so I can breath for a while. That’s all I ask.