Contributing To The Geekiness Of Minors, Part 2 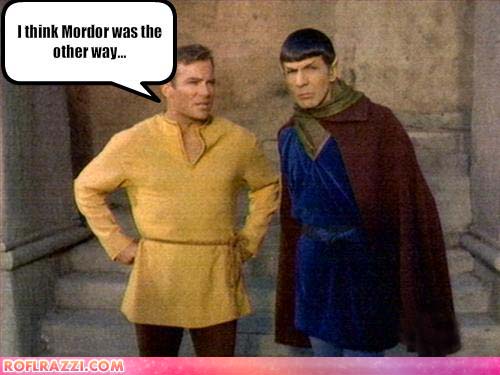 Back in November I confessed my decision to introduce Luke and Elizabeth to that nerdalicious pinnacle of geekdom, the Star Trek franchise. I’d added Season One of the original series to our Netflix queue, and we’ve gradually been working our way through them, averaging three or four episodes a week.

It had been more than 20 years since the last time I’d watched this first incarnation of the Trek universe, and I’m surprised at how much I’m enjoying its cheesy campiness from the perspective of an old grup. Luke likes it too, although he has trouble keeping up with the plots and tends to ask questions all the way through, which necessitates heavy use of the Pause button as I attempt to explain stuff to him. Elizabeth doesn’t have any trouble following the storylines, but since most of them don’t make a whole lot of sense if you examine them too closely (seriously, there are usually OBVIOUS SOLUTIONS to these people’s problems that are WAY LESS COMPLICATED than the ones the writers come up with), she is rather less enamored of the whole business than we are. But we watch it together, and somewhere in between trying to explain to Luke how Kirk is able to talk a master supercomputer into self-destructing for the good of the population it’s been controlling, and snarking with Elizabeth about the EXTREME improbability of that ever actually happening, it’s become a happy addition to our nightly routine. Elizabeth has started slipping little Trekisms into her conversations and comics. And a week or so ago I poked my head into Luke’s room and told him that if he didn’t get up and get dressed we were going to miss the school bus, to which he replied, half-awake, “But I am extraordinarily sleepy.”

Sniffle. My son has a little Vulcan in him after all. TOTALLY worth all the wedgies he’s going to get in middle school for using words like “extraordinarily.”

So now we’re coming to the end of Season 1, and I just hopped over to Netflix to add Season 2. Only to discover that Netflix doesn’t HAVE Season 2. Or Season 3. Like a heroin pusher who offers the first couple of doses for free and then cuts off the supply until the cash appears, Netflix is forcing me to either give up my new family activity or hand over a pile of money to Amazon, which I SO can’t afford to do right now. It’s MONSTROUS, I tell you.

Not that I couldn’t quit any time I wanted, mind you. There are PLENTY OF OTHER geeky shows out there with which to blight my children’s social prospects. Get Smart comes to mind; the kids would adore that.

Pfah. Who am I kidding? There is no substitute for the Holy Grail of geeky goodness.

Hmm…Circuit City is going out of business, I bet I could score some Trek on Clearance there.

And after all, it’s for the children.

11 thoughts on “Contributing To The Geekiness Of Minors, Part 2”