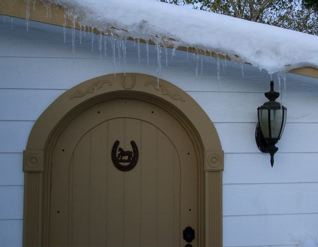 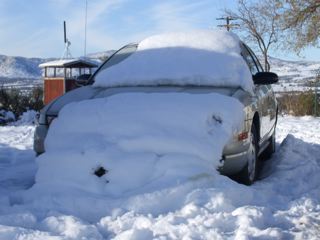 If I had a real car that weighed more than 75lbs I would be able to move about freely by now, but my little toy Saturn is rendered helpless by the few inches of snow that remain. A fellow from next door helped me drive/push/coax it as far as my back gate where Steve’s truck tracks end, so I think I should be able to make it to church tomorrow. Funny how much I’ve come to look forward to that every Sunday.

Yesterday my nice neighbor, who has actual grownup vehicles, was able to get out and into town, and she brought me some milk because we were running low. I have been constantly surprised and warmed by the kindness of people. In retrospect I cannot believe how socially isolated I let myself become during my marriage.

Snow damage toll: several trees lost branches, but there’s nothing too catastrophic. My stand of redshank took the heaviest damage and the big pine in my front yard comes a close second, but least nothing landed on the roof.

My house is very clean right now. I’ve had nothing else to do.

This seems like a good time to pull out all the bits and pieces that I’ve thought would be cool to blog about but weren’t worth having posts of their own. Like how Elizabeth was Student Of The Month in November, and how I’ve had to lock all the chickens back up because one bold coyote got hungry enough to come right onto the property and start stealing chickens out from under my dogs’ noses. He got two pullets before I realized what was going on and locked up the henhouse.

Things the Internet magically knows about me:

I can totally believe that I was a monk in my past life. I can see myself now, quietly tending my garden in some sunwashed courtyard, the gentle warbling of birdsong providing a peaceful soundtrack to my simple contemplations.

Decapitation? Absolutely, if I lived in Alaska. The other monks got fed up listening to me whine about all the damn snow. It’s just a question of which one of them snapped first, and what sharp utensil he was holding.

Who Were You In a Past Life?

Other things the Internet magically knows about me: I am Probably A Woman.

We guess https://dsilkotch.wordpress.com/ is written by a woman (52%), however it’s quite gender neutral.

Rabid Sock Hotel. Whoa there, all our socks are freshly laundered, thankyouverymuch.

Here are some Google search terms that brought folks to my blog recently:

how to sleep with mice in house

Try my method: get cats

There are rules?? Crap, I’ve probably been doing it all wrong!

expecting hard what will happen to my watermelon

I feel you, my friend.

what the hell moments

This person definitely came to the right blog.

Um. I got nothing here.

Dude, just give him some old newspapers to read like everyone else does.

I could use a few upbeat Christmas snogs myself. Where’s my mistletoe?

I…have nothing to add to that image.

If there were any chance of anyone seeing me naked in the foreseeable future, I would totally want to do this:

And I think that’s all I have today. Must go huddle in front of my woodstove now and thaw out my fingers.

2 thoughts on “Snowed in”