Our Grand Adventure, Part I

This week the kids and I got to cross two more items off our bucket list: traveling somewhere by train… 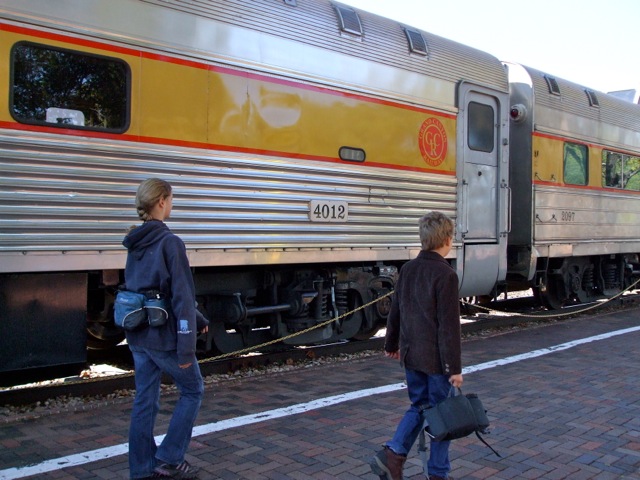 …and seeing the Grand Canyon.

When we first started talking about this trip, we’d planned to do it sometime between Thanksgiving and Christmas. The kids would be out of school, the garden would be in low-maintenance mode, and it wouldn’t be too hot to hike the Rim. I mentioned the idea to another mom in my hiking group, and she must have mentioned it to others, because pretty soon it had become an official group outing. This was awesome, for several reasons. One, I’m realistic about the risks of a single mom and two kids traveling by themselves, and a group feels safer. Two, it’s more fun to hike with other people. And the biggest reason, the lady who organized the trip did such an amazing job of planning and finding discounts, that we ended up doing WAY more fun stuff than the kids and I had originally planned, for hundreds of dollars less than our basic plan would have cost! It was unbelievable how inexpensive and FUN this trip was. The only downside was that the trip was scheduled for October rather than December, which actually turned out to be an upside, as we realized later.

We left Anza on Saturday morning. Most of the group were carpooling from the Temecula or Hemet areas, or taking Amtrak from Riverside CA to Williams AZ, but it made more sense for the kids and I to drive straight from Anza to Williams via Palm Springs, rather than detouring in the opposite direction to follow the others.

The weather was autumn-brisk, and this was our holiday trip after all, so we blasted Christmas music the whole way there. Trans-Siberian Orchestra makes the miles fly past, and the drive felt shorter than the six or so hours it took. We arrived at the Grand Canyon Railway Hotel around 4pm, checked into our room, met our roommate (sharing rooms was part of the package) and then explored the grounds. We found a heated indoor swimming pool and a jacuzzi, and wished we’d brought our swimsuits. Then we found a gym, stocked with a dozen different kinds of workout and weightlifting equipment. We had it mostly to ourselves, so the kids had to try every single step-trainer, spinner, cross-trainer, weight press and treadmill in the place. 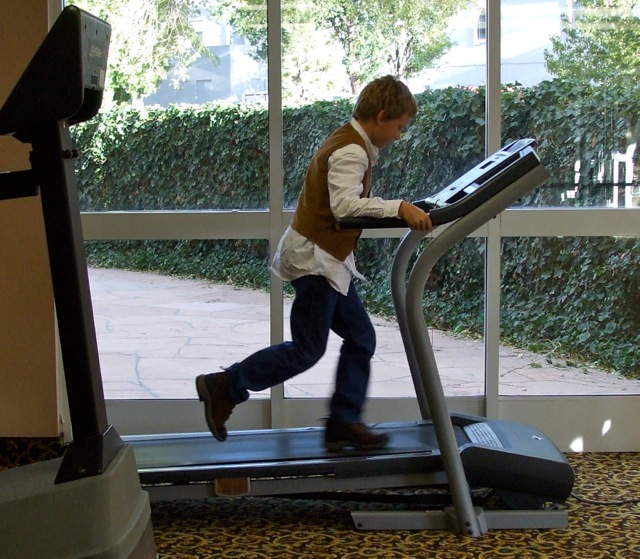 At 6:00 we met with the rest of the group for dinner. One of the really cool things about this outing was that nearly everything was covered by the incredibly low package price that we’d already paid, including dinner Saturday night and breakfast Sunday morning at the Railway Hotel Restaurant. It was buffet style, so no shortage of food. After dinner the whole group relaxed in front of the fire in the beautiful lobby, and discussed hiking plans for Sunday and Monday.

Brief tangent: the furniture in the hotel lobby was enormous. When I sat on one of the sofas there I felt like a child. Luke and Elizabeth looked like toddlers. 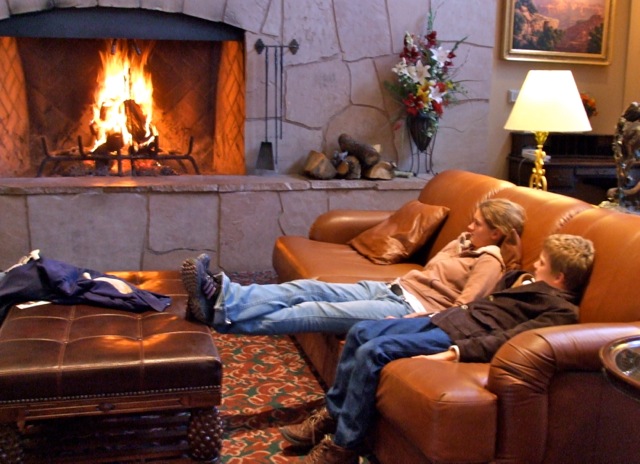 That fireplace in the photo is HUGE, but it looks normal-sized next to that giant furniture.

Anyway, so we planned our itineraries. Some of us really wanted to get out there and hike the trails, others preferred to make use of the shuttle tours, and some were looking forward to just relaxing and socializing in the Village. There were something like 23 of us altogether, so a bit of organizing was needed to make sure everyone had the experience they wanted.

Once all of that was settled, most of the group went out to enjoy the Williams nightlife. The kids and I headed back to our room, relaxed for a while and were asleep by ten, because we are party animals that way.

Alas, our roommate stumbled in very late (or early, really), puttered around noisily for what seemed like forever, and then finally went to sleep — and began snoring at such an impressive volume that all our hopes of sleep were shattered. Well, Elizabeth managed to doze off, but Luke and I buried our heads under pillows and blankets to no avail. I think I finally managed a fitful sleep sometime after four, because when the alarm went off at six it did wake me up. Luke apparently had the same thought, because he sat up and said in a surprised voice, “Wow, I DID fall asleep!”

One thing about Luke: if he feels that someone is in need of chastising, he ain’t shy. Until we’d gotten dressed and left the room I had to constantly shush him, because he fully intended to give our roommate a lengthy piece of his mind. Once we’d checked our luggage and were heading to breakfast, I was able to explain to him that some people stay up later than others, and some people snore, and it’s just the luck of the draw when it comes to matching up roommates, and she wasn’t trying to keep us awake on purpose, and under no circumstances was he allowed to scold her. He accepted that, though not particularly gracefully, and then we went to the restaurant and comforted ourselves with orange juice and eggs and sausage and fajitas and biscuits and gravy and muffins and pastries and yogurt and frittatas and toast.

After breakfast we gathered up our carry-on belongings and headed over to the train depot. Once there we were treated to the obligatory goofy Western shootout show.

Then we boarded the train, and we were off to the Canyon! It took about two hours and 15 minutes to get there, and the scenery was wonderful.

We saw a herd of antelope in a meadow; there was wildlife everywhere. Near the end of the ride a guy came to our car with a fiddle and entertained us with corny jokes.

Being a cantankerous old fart, I enjoyed that about as much as I’d enjoyed the Old West show. Sorry Fiddle Guy, but your jokes are lame. Make funny jokes and I will like you.

Once we arrived at the Grand Canyon Depot on the South Rim, we caught a shuttle to Maswik Lodge, where we would be spending Sunday night. It was too early to check into our room, but our checked luggage had already arrived there and we were able to drop off some of our carry-on stuff for safekeeping. Then the kids and I walked up to the Rim to get our first look at the main attraction.

Technically, it wasn’t the first time I’d seen the Grand Canyon. My parents had taken me there a few times as a kid, so I had a vague memory of it. And to be honest, I was a little concerned that Luke and Elizabeth would be too jaded by the wonders of modern technology to be impressed by a canyon, however grand.

So we walked up to the Rim, and there it was, stark and colorful and impossibly vast.

It’s so big that you can only can only see parts of it at a time. As long as it took us to drive from Anza CA to Williams AZ, that’s how long it would take if you were to drive from the South Rim around to the North Rim.

The kids didn’t say anything for a long time.

We walked along the rim trail for a while, killing time until it was time to rejoin the group. I could see that the kids were not unimpressed — quite the opposite — but they seemed to be having trouble finding the right words to describe the sheer enormity of the thing.

Elizabeth finally found a comfortable context in technology. “It looks fake,” she decided. “Like a painted backdrop.” 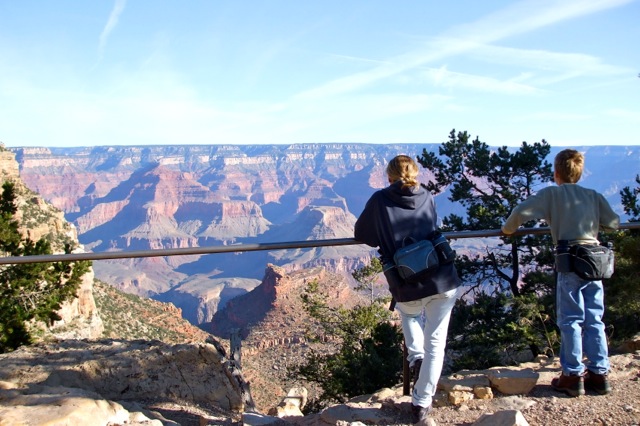 Luke took longer to put his reaction into words. I think it was a couple of hours later; he’d been unusually quiet since his first glimpse into the abyss. “There is NO WAY,” he suddenly burst out, “that Paul Bunyon could have made that by dragging his axe along the ground. I don’t care HOW big he was.”

One thought on “Our Grand Adventure, Part I”