I’m not a big enthusiast of the trick-or-treating thing. If you live in Anza you can’t really do it locally, so you have to take your kids to Temecula or Idyllwild or some other town to knock on strangers’ doors for the purpose of collecting enough candy to make your offspring twitchy and irritable for weeks.

But Luke and Elizabeth look forward to it every year, so their dad takes them out for the annual candyfest. I’m good with that; it’s an important (to them) part of their Halloween experience.

When they get older I plan to start getting into the really fun, spooky stuff: Knott’s Scary Farm, Universal Studios Horror Nights; serious Halloween scaries. In the meantime we keep it simple and enjoyable. We’ve unanimously decided to make the Big Horse Corn Maze an annual tradition, so we did that last Friday: 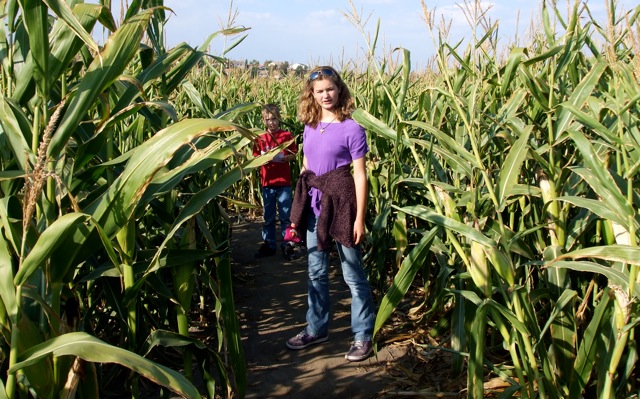 Last year Elizabeth took the lead through the maze; this year Luke said it was his turn. That sounded fair to me, but Elizabeth fussed about it and then said we should split up and race to the exit. Ah, adolescence. So Luke and I went in one direction and Elizabeth headed off in another.

Luke and I had two advantages: one, we had a “passport” that provided clues for finding the right paths. You answer a trivia question at each of the ten stations set up throughout the maze, and correct choices direct you in the correct direction. We’d brought two passports, so Elizabeth could have taken one when we split up, but she said her sense of direction was all she needed.

The other advantage Luke and I had was that Thursday I had looked online at an aerial view of the maze, and had traced out the route visually, so I knew the general shape of the path and which parts of the maze it wound through. We found our way to the exit in pretty good time.

In all honesty, I wouldn’t have been terribly surprised to see Elizabeth waiting for us there. She’s kind of freaky that way sometimes.

But no; we’d gotten there first. So Luke and I headed back into the exit, to meet up with her on her way out. A few twists and turns in, Luke suggested that we split up to look for her. I thought about it, decided that wandering alone and mildly lost through a corn maze was an acceptable level of Halloween spookiness for a 10-year-old, and said okay.

I worked my way backwards through the maze and came out the entrance. I hadn’t found Elizabeth but I expected to see her, and probably Luke, waiting for me near the exit. But the maze attendant said they hadn’t come out yet. So back I dived into the exit, now thoroughly into the spirit of the adventure.

Long story short…we eventually all found each other, a fun time was had by all, and then it was time to move onto the second part of our afternoon: shopping for costume materials.

For the past few Halloweens the kids have made their costumes out of whatever bits and pieces they could scrounge up from what was already on hand. This is because I had neither the money nor the enthusiasm for buying elaborate outfits. But this year they both had specific requests: Elizabeth wanted an Espio The Chameleon costume, and Luke wanted to go as…a scary evil clown.

Elizabeth’s request was no surprise. But they don’t sell Espio costumes, so the plan was to buy the stuff to make one. Magenta pants and top, white gloves, some felt for a mask…this was doable.

The evil clown thing was hilariously out of character for Luke. My sweet, bright, affectionate boy wanted to dress up as the most terrifying thing known to man, and I was immensely looking forward to making that transformation happen.

The only drawback was that I still didn’t have the money for complicated costume-making. But I figured, since Steve was the one who’d be taking them trick-or-treating, it was fair to ask him if he’d like to help chip in for costume materials. I was expecting maybe $20, but he added a generous $75 to that week’s child support payment. Which was awesomely cool and greatly appreciated.

So, flush with riches, we went forth to buy costume stuff. At Walmart we found face makeup and a fake bloody knife for Luke. At Target we found magenta pants and top for Elizabeth. And then we found the motherlode: a place called Halloween Express, a freaking warehouse-sized emporium of all things Halloween. Pay dirt!

But while I was wandering around finding kid-sized Scary Evil Clown paraphernalia, Luke’s imagination was slowly veering off into a different direction. He found a little black silk top hat, a black walking-stick, an elegant pair of gold-rimmed glasses, a polished wooden pipe, and was showing intense interest in the rack of fake mustaches. He looked like a cross between Jack the Ripper and the little millionaire Monopoly dude. “What are you?” I asked him, gradually realizing that I would be putting all my lovingly-collected evil clown stuff back on the shelves.

“I don’t know,” he said, but we both knew it didn’t matter. He had found the outward trappings of the Dashing Gentleman Heart Of Luke, and there was zero chance of him leaving the store without them. “I have that black cloak at dad’s house,” he added dreamily.

“We still have the makeup and the bloody knife,” I pointed out. You could be…Dr. Jekyll? Or Jack the Ripper?”

“Meh.” Whatever passing whim had made him want to dress up as something scary and evil had already passed. “Maybe I’ll be an Evil-Clown Hunter. Then I can still carry the knife.”

Our last stop was Joanne’s for some felt to make the Espio mask and tail and a few other finishing details. Elizabeth set to sewing over the weekend, and her costume is already about 80% done. Luke’s still going with the Gentleman Clown-Hunter idea, and he has enough stuff in his closet to finish the outfit.

I’m still not a big fan of the trick-or-treat thing, but I’m starting to remember the childhood appeal of donning an alternate persona for a night of community make-believe. I’m glad they get to experience it, even though I personally don’t do the door-to-door thing.

Pics to come, once the costumes are finished. Is Halloween really less than two weeks away? Where did October go?