Yesterday was the kind of day that, at the very beginning of my marriage, I thought we’d be having all the time once our kids were about this age. (That sentence is kind of hard to parse. Read it a few times until it makes sense.) It wasn’t a spectacularly exciting day, or expensive or complicated, it was just…fun.

Slight tangent: there is a family that goes to our church that is seriously Little-House-On-The-Prairie homesteading old fashioned. They are very nice. They have something like eight or nine kids, and Elizabeth has bonded with one of the girls, and two of the boys are pretty close to Luke’s age (one a little younger and one a little older). I’d mentioned to the mom and dad how disappointed Luke was that his trip to camp didn’t include a visit to the gold mine, and that I planned to take him to see it myself. They told me that they homeschool all of their children, and that they are planning an educational field trip up to Julian as soon as school starts (so they can get school credits for it), and that they plan to visit the gold mine, the museum, the old historic jail, the old cemetery…all the stuff that Luke would go absolutely wild over. So OBVIOUSLY I invited myself and my kids along for that trip. And also I am seriously considering having them homeschool Luke and Elizabeth along with their kids.

But I didn’t want to make Luke wait another month for his first gold mine experience, so I hopped back online to see what else we could find in the meantime, and I discovered The Smith Ranch. As soon as I saw that there was a ride on an old narrow-gauge mining train involved, I knew this was what I was looking for. Luke has been crazy about trains pretty much his whole life. I made reservations for the following Monday.

The homesteading family — lets call them the Ingalls since they’ve requested that I not use their real name on the Internet — had mentioned a nice park in Julian that they planned to stop at for lunch on their field-trip day, so I looked it up and figured I’d add that into Monday’s trip too.

So yesterday me and the kids packed a picnic lunch and drove up to Julian. The park was a bit farther off the beaten path than I’d expected, but we found it with no problem. And then…somehow I managed to lock my keys in my car while filling out the parking fee ticket stub for the front window.

On a family trip with Steve that might have been enough to sour the whole day right there, but yesterday it was one of the little things that are not worth sweating. My one concern was that we might not make it to the Smith Ranch in time for the mine tour, but my spidey-sense (I don’t know what else to call it but I’ve come to trust it over the past 15 months) was telling me that everything would be fine, so I sent Luke and Elizabeth and the lunch-filled cooler off to frolic on the playground together while I examined my options. I found a park employee with a Slim-Jim, but my door locks would not bend to his will, so I called AAA and as it happened there was a AAA assistance place thingie just seven miles up the road and there was already a truck headed in my direction on another call and maybe 15 minutes after I phoned for help my door was unlocked and I was good to go.

I didn’t have time to explore the park with the kids, but we got to the ranch right on time and still in fine spirits.

The Smith Ranch? Is awesome. The guy who owns it used to be a high school teacher and he obviously knows how to connect with kids. He was in constant teaching mode but in the best possible way. There was only us and one other couple there, so Luke and Elizabeth got most of his attention and he really drew them into the historical setting.

The tour began with the train ride: 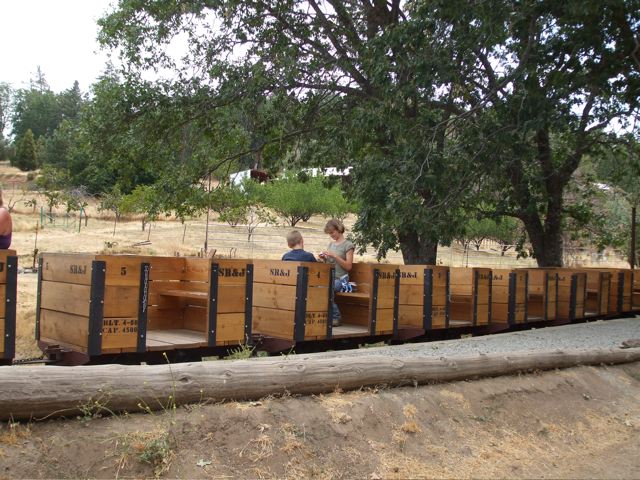 It stopped several times at various points of interest, like this pear tree that was planted in the 1840’s by the miners that had originally settled the claim:

One of the stops was at a little fort the family is constructing from trees that have died in the drought. Teacher Guy asked Luke to help him raise the flag there: 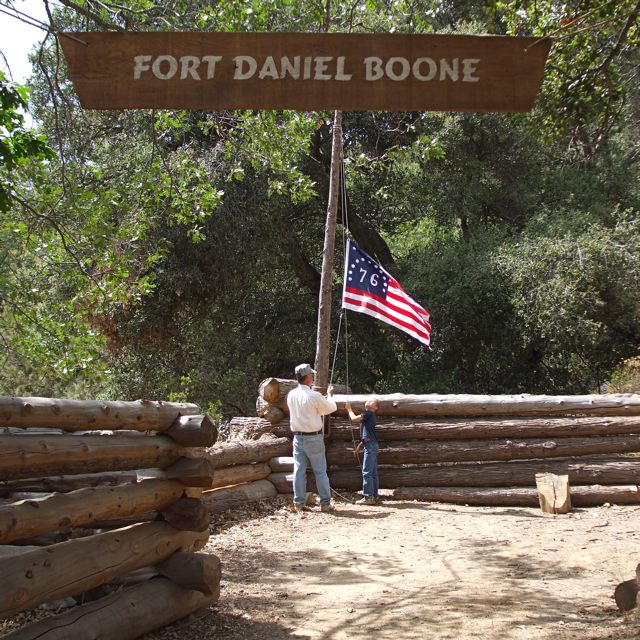 There were old 1800’s-era artifacts all over the place. 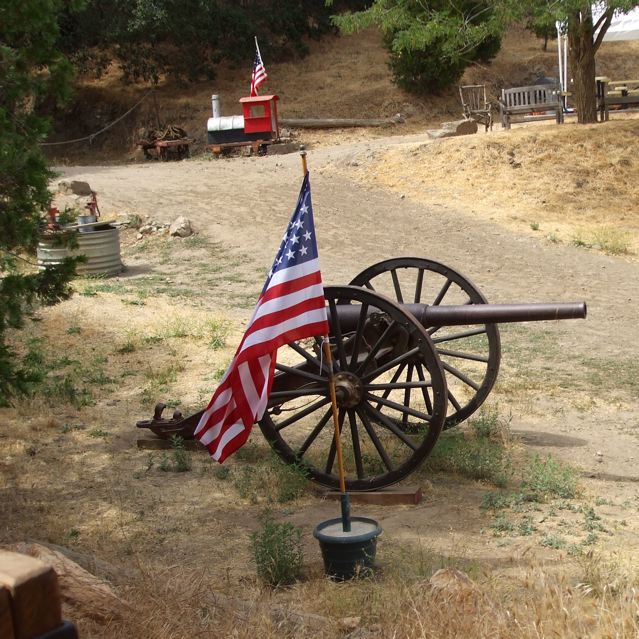 Eventually the train pulled up at the mineshaft entrance, and guests were given the option of walking in or riding in an ore cart. The kids chose the ore cart, the rest of us walked. 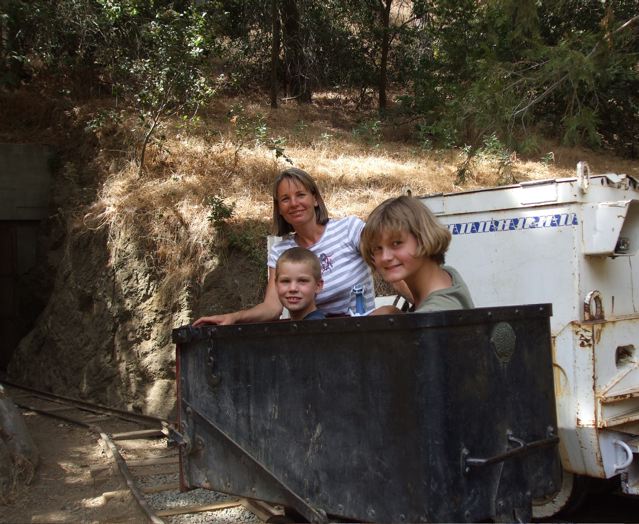 The mine itself is still in the process of being re-excavated after having been filled with dirt at some point before the current owners moved in. It only goes back about 40 feet right now, but that’s deep enough to be pitch-black and cold…you really get a sense of being underground. But what I enjoyed most wasn’t the mine itself, it was the way Teacher Guy (and his wife, when she joined us as we were coming back out of the shaft) wove a steady stream of verbal imagery that vividly brought that period of history to life for us.

After we left the mine we were brought to an old sluicing trough with crushed quartz and sand and water and a few gold-painted pebbles in it. They showed us how to pan for the “gold,” and we all had fun trying our hand at that. Then they opened up their little “general store,” which was fascinating because it was full of more pioneer artifacts, and we got to trade the “nuggets” we’d found for stick candy and red licorice. We adults enjoyed the panning (and the candy!), but Luke and Elizabeth were MESMERIZED by the whole concept. They stayed at it long after the rest of us had wandered off. 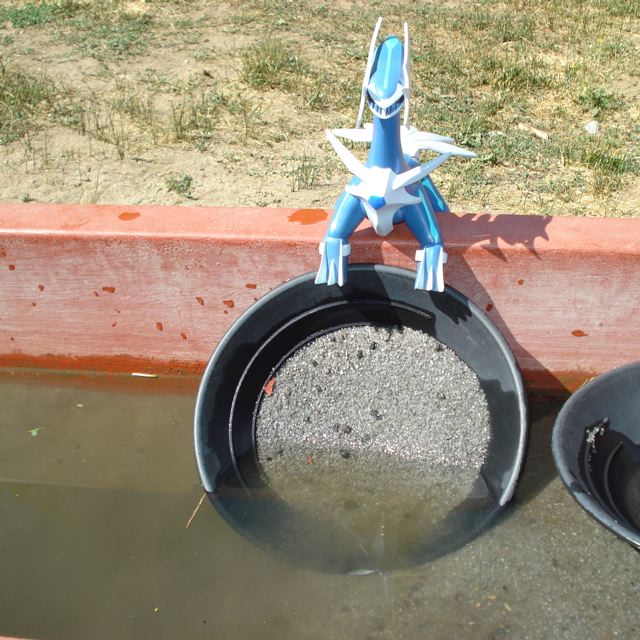 …and then we sat down in a shady spot while Teacher Guy and his wife showed us more artifacts and told us the stories behind them. I know it probably sounds dry and boring, but it wasn’t at all. Even the kids were hanging on their every word.

They had a reproduction of a letter that a Great-Great-Uncle of the wife had written during that time period, and apparently back then sending letters was seriously expensive business because the writer had gone to great lengths to conserve paper and postage and this letter had still cost him $5 to mail — one-third of a month’s pay for him! And look at the tricks he’d used:

He not only used both sides of the paper, he actually used each side TWICE — once writing vertically and again writing horizontally. And he left a little blank square on one side, where he wrote the mailing address after he’d folded the letter to create its own envelope.

Mrs. Teacher read us part of the letter, and it was very entertaining.

The whole experience, the whole afternoon, was relaxed and fun and educational and awesome. I was so glad we’d gone.

Julian was settled as a gold rush town, but what it’s most famous for nowadays is its pies. The whole town is full of fruit trees, mostly apple, and the Julian Pie Company uses nothing but locally grown fruit. We stopped there on the way home and picked up a dutch apple pie.

So that was our first family trip to Julian, and definitely not the last; I think there’s enough historical stuff up there to keep Luke hooked for quite a while. I’m really looking forward to our field trip with the Ingalls next month.

The funny thing is, Steve used to go up there all the time during our marriage, and he made it a point never to let me or the kids go with him. (And now I know why, but that’s another subject.) How ironic is it that we had to ditch the cowboy before Luke got to explore a fascinating, historical Old West town only 60 miles from home?

Tomorrow the kids have a playdate at the Ingalls homestead, and Mrs. Ingalls and I will be discussing the possibility of having Luke and Elizabeth homeschooled with her brood. I’d have to clear it with Steve, but he knows as well as I do what a crappy school Hamilton is.

It’s breathtaking, how fast the changes are coming these days. I wonder what our lives will look like a year from now, or five years from now.

I’m looking forward to finding out.

3 thoughts on “A Thoroughly Enjoyable Day”