Last week I helped out at the kids’ school, making papier-mâché props for a musical production that Elizabeth was in. These are the two I helped build, “Sky God” and the tree:

The play was last Thursday night. Elizabeth was in the soundtrack section, and did a fine job on the xylophone: 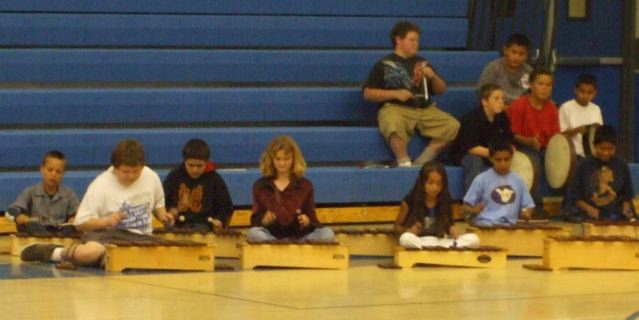 Friday after school I picked the kids up from school and we headed down to Temec to run some errands. Elizabeth needed a haircut and some new boots, and we wanted to see “UP” (which btw is a fantastic movie). The whole afternoon was a lot of fun…except for the boot-buying experience, which was thankfully AFTER the haircut and movie and a very nice lunch at Souplantation. The boot thing? That was harrowing.

What happened was, Elizabeth saw these:

You can’t tell from the pic, but they are covered in a fine glitter that makes them sparkle in the most delightful fashion. They were adorable and Elizabeth passionately loved them and I would have been happy to buy them for her…except that they weren’t available in the size she needed. They were available in the size she was already growing out of, and also in Much Too Big. I did not want to pay that much money for either of those sizes.

There were tears, and angry words, and finally what in Elizabeth-World passes for a full-on tantrum (which is intense but at least relatively quiet, much like Elizabeth herself), and finally I just picked out a pair of boots identical to the ones she was already wearing but a half-size larger and bought them and we got out of there.

Then there was fuming. That made the rest of our shopping so much fun!

Later that evening, when Elizabeth had gotten over the worst of her disappointment, we got into another squabble over some unrelated something. Since Elizabeth and I don’t usually squabble much at all, I’m pretty sure it was leftover grouchiness spilling over. At one point she actually frowned and declared, “Mom, you have spoiled me rotten and you’re just going to have to accept the consequences.”

I just sort of blinked and stared at her for a minute. Then I said, “You feel that I have spoiled you rotten?”

She shrugged in a rather cavalier fashion. “I’m a spoiled brat. It’s too late for me to change now. You’ll just have to get used to it.”

“Wow,” I replied. “Most eleven-year-olds, especially the spoiled brat variety, aren’t able to see that about themselves. I’m kind of impressed.”

The thing is…as eleven-year-olds go, I really think Elizabeth is near the lowish end of the brattiness scale. I mean, she has her moments, but I don’t know anyone who DOESN’T have the occasional moment, especially in that age bracket. And while she has most definitely inherited her father’s egocentric view of the world, I think for the most part she chooses to use it for good and not for evil.

And then sometimes she just digs her heels in and becomes the proverbial Immovable Object. Like with the parade float thing.

Around Easter our church’s youth music director put on a great production called “The Secret Of My Success.” Both Luke and Elizabeth had speaking parts and solo singing parts as well as singing with the group, and they both did really awesome. Now there’s another production in the works for July, and they were both given large speaking and singing parts. Which they were fine with, until they realized that being in the play meant that they’d also be riding, in full costume, on the church’s float in this year’s Anza Days parade. Elizabeth said she wasn’t going to be on the float, she was going to be on the sidelines watching the parade, and that was final. I told her that I’d be helping out with the float that day so if she was going to watch the parade it would have to be with her dad, and I do not know what his plans are for that day. She said she’d take her chances. No amount of discussion has changed her mind. Luke does what Elizabeth does, so if she isn’t going to be on the float then he doesn’t want to either.

Of course I could ORDER them to take the speaking parts and ride on the float, and they would do it, but that’s not the kind of parent I want to be. There would be no joy in the play for them or for me under those circumstances. So, as disappointed as I am that they won’t get to show off their acting talents this time, or ride in the parade, I’m not going to insist.

And from the “What The Heck?” category, yesterday Elizabeth…wait, this one needs some backstory. Okay, a couple of weeks ago Elizabeth ate asphalt on her roller skates in a parking lot and got a big ugly scrape down one arm, near the elbow. Somehow THIS of all things is embarrassing for her, so for the past two weeks she’s been wearing long-sleeved shirts to school even on sweltering hot days so the other kids won’t see the scrape and ask questions.

So yesterday she wore a red shirt. While she was at school she cut out carefully-shaped pieces of paper and stapled them to the chest and sleeves of her shirt so that it looked something like this, but red: 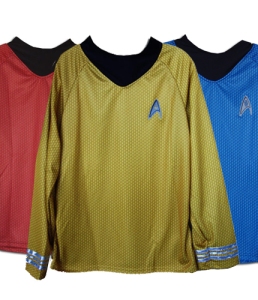 I just about fell out of the car laughing when she got off the bus wearing that. When I could breathe again I pointed out that she’d taken quite the risk, walking around in that shirt.

“I know,” she nodded philosophically. “I lived, though.”

But in the sweet name of basic self-preservation, leave the red shirts at home! There’s just no sense in tempting fate that way.

7 thoughts on “Regarding Elizabeth”