Poor neglected blog, all lost and cold and scared and hungry. I totally should be giving it more attention.

So…let’s catch up. We have a splendid apricot crop this year; we all (except Steve, who doesn’t like apricots–the commie!) have been gorging ourselves on those. I really need to get some into the freezer before they’re all gone.

There’s an annual tradition round these parts called “Anza Days,” which always falls on the weekend before (or of) July 4th, and in years past it used to be this enormous three-day celebration that everyone looked forward to with great anticipation. It’s gotten smaller and shabbier every year, and nowadays it’s usually just a small parade down the main highway and some vendors’ booths set up in the park for half a day. Normally the casino puts on a nice fireworks display the same night, but this year there was some disagreement about which weekend it should fall on, so the parade ended up being on June 28 and the fireworks were on July 5th. Turns out there was a dance at the Community Hall on Friday the 27th, but we didn’t even know about that until the next day. We were sorry to have missed it, because the Anza Days festivities are actually where Steve and I first met back in ’94, and all the dancing we did that night is a sweet romantic memory. Ah, the innocent days of youth.

We had fun though, because with no fireworks at the casino for Anza Days we ended up at Julie and Josh’s place for dinner and a long dip in their fantabulous jacuzzi. Julie and Josh are the coolest people ever — we have so much fun whenever we hang out with them.

Monday the 30th Steve and I had our second counseling session. It had become mildly troublesome to arrange babysitting for these appointments, plus we didn’t like the way it was cutting into our “family days,” so I did some research and found a place in Temecula that offers drop-in childcare services. The kids stayed there while we saw the counselor, and they LOVED it. The place offers toys and games and arts and crafts and snacks and all manner of fun stuff for an amazingly low fee. So next time I want to catch a grownup movie I won’t have to fret about what to do with the younguns! Score!

Anyway, by the end of this second session we were having serious doubts as to whether the counselor really had anything useful to offer us. He didn’t have any helpful insights into our problems that Steve and I hadn’t already talked to death on our own. He accurately identified our issues — but we already KNOW what our issues are. The suggestions he made were things we were already trying, or had tried in the past. Still, we optimistically made a third appointment, because we are Committed To Making This Work, dammit.

After the session we picked up the kids and headed over to the mall to see WALL-E, and I liked that an awful lot. Absolutely stunning imagery; Pixar never lets you down in the animation department. Although…I guess I might as well admit that I was expecting a bit more from the story itself. It was a very simple tale, without all the clever complexity of the previous Pixar offerings. Still totally worth seeing on the big screen, and I’ll be buying the dvd when it comes out.

Stormy came down with some sort of respiratory bug that had me worried enough to call the vet out, and he prescribed a round of antibiotics for her. She seems to be feeling better now, thank goodness; I get all woozy at the thought of anything happening to my old girl.

Saturday the 5th there was a cowboy thing going on at the local gymkhana arena, with cattle events like team penning and sorting and stuff. Steve and I didn’t enter anything (this year all our horses are either too old or too green), but we stopped by to check it out and socialize a bit. After sizing up the competition, we decided that Marshall and possibly even Mahogany probably wouldn’t disgrace themselves at next year’s event if we worked with them some between now and then. We didn’t see any really seasoned cowhorses there; maybe the money wasn’t big enough for the pros to bother with.

That afternoon we went to a small barbecue at the home of one of Steve’s friends. That was REALLY nice. Not a lot of people, just a small group of very friendly folks and plenty of good food. And from the front yard there was a perfect view of the fireworks, even better than we’d have gotten at the casino! We all agreed that we’d have to make that an annual tradition.

Sunday morning we dragged our sleep-deprived bodies out of bed and loaded up the horses and went to help out at the Wellmans’ roundup. 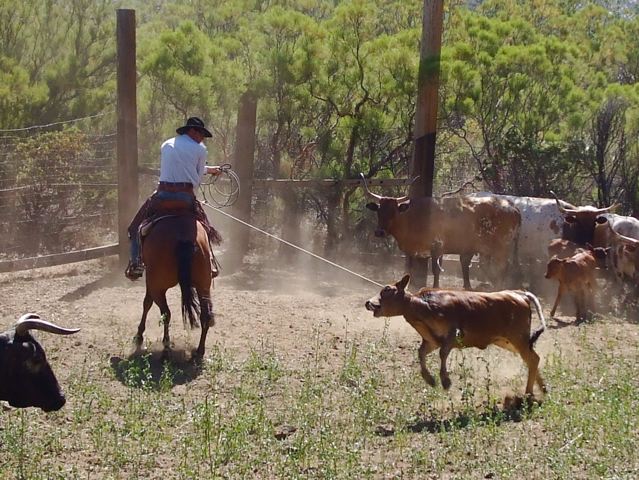 That is the nicest family. I love every single one of the Wellmans. :^)

Elizabeth wants to buy a toy that I don’t particularly want to spend money on in the middle of what has shaped up to be a spectacularly costly month for me. We debated the issue, and then compromised. I outlined a section of my garden and told her that I would pay her $5 to weed it. That wouldn’t buy the toy, but if she did a good job I would give her more $5 sections to weed. She did such an incredibly perfect job that she has duly secured the position and income of Official Garden Weeder. Money well spent and well earned!

Monday the 7th was our third counseling session. We dropped the kids off at the childcare place, put in one more hour with Doctor Obvious, and came away in perfect harmonious agreement that this guy has absolutely nothing helpful to tell us. No fourth session was scheduled.

I mostly try to leave the personal drama out of these updates, but there’s rather a lot of it going on. The highs are very high, and the lows are very low. We both WANT the marriage to work, and I can honestly say that what we have now is worlds — universes — better than what we had the first time around, but at the heart of things is still the fact that Steve and I have wildly different approaches to life itself. That doesn’t necessarily have to be a bad thing, but from time to time it just is.

But when things are good between us they are so very very good. Good enough to make us temporarily forget all about the other moments when we hit that solid wall of conflicting sensibilities and stand there all stunned and shaken and convinced that this can’t possibly work out at all.

He hasn’t moved back in, and frankly neither of us are in a big hurry for that to happen. The scary moments are slightly less scary when you don’t feel like you’ve actually committed yourself to anything permanent yet. We’re still taking this one baby step at a time and leaving all the emergency exits open and handy just in case.

The kids are just wishing we’d make up our minds already, one way or the other.

Can’t say I blame them; I’m wishing the same thing myself. There must be SOME way of skipping to the last page and finding out how all this turns out in the end….

One thought on “Still Here”