During the first month or two after Steve and I separated, I spent most of my evenings catching up on reading a big stack of Organic Gardening back-issues that people had given me over the the years. They date all the way back to 1978, and they were exactly what I was in the mood for at that point. Tons of great advice on how to enjoy a simpler, healthier, more self-sufficient lifestyle without all the expensive modern clutter. I was hugely inspired by stories of folks living on properties the size of mine — or smaller — and producing all or most of their own food at home. I started making a list of new fruit trees, berries and other perennial food plants that I want to add to my little homestead.

Then there was an article about how quickly the nutritional value of grains deteriorate after they are milled into flour. Apparently the oils start to go rancid very soon, and within a couple of days the flour is practically worthless for food value. The original grains, in contrast, remain fresh and viable (as in, you can plant them and they will grow) for years and years if properly stored. Up to twenty years by some estimates!

Considering how fast the cost of food is rising, the idea that I could buy a whole lot of wheat berries and dry corn, mill them into flour and meal myself as needed, and enjoy better flavor and nutrition for just a little extra work was very appealing to me.

So I did a bunch of research to find the best grain mill, and decided that the Country Living Grain Mill was what I was looking for. There was a three-week wait on it (apparently self-sufficiency is becoming a popular concept these days), but I added my name to the list and eventually it arrived.

When we tried to test it, we very quickly realized that it has to be bolted or clamped to a solid surface or it shimmies around too much. I wanted to set it up in a permanent spot, but I wasn’t quite ready to drill holes in any of my countertops, so after a bit of thought I decided it was time to pull out our old unused furnace and use that space for the mill.

Once the furnace was out, I cut through the inside wall to create access from the kitchen, cleaned up the space, put in an old cupboard from one of the sheds, and bolted the mill to that.

Today we gave it its first test drive! The kids wanted waffles, so I dumped a cup of wheat berries into the hopper and told the young-uns to start grinding. Luke was wildly enthusiastic about working the mill, but it turned out to be just a bit harder than he could really manage. Elizabeth took over the task, and we had our flour just a few minutes later. 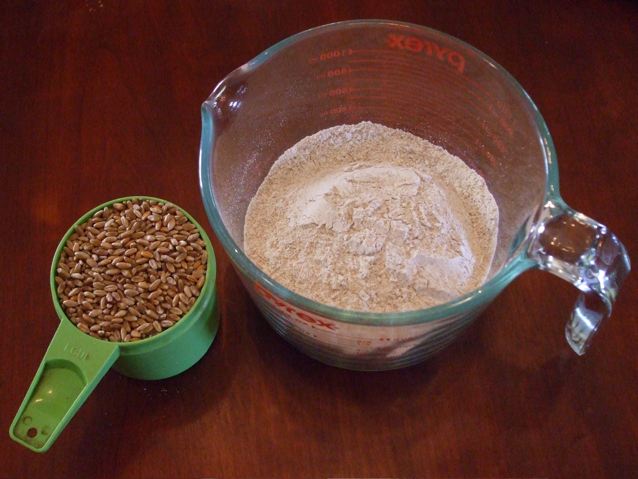 One cup of wheat berries made about one-and-a-quarter cup of flour, which is exactly what my waffle recipe uses, but after I’d made the batter I realized that the recipe must be allowing for the settling that occurs in prepackaged flour. Freshly-milled, unsettled flour made a noticeably thinner batter. Next time I’ll use a bit more than the recipe calls for.

The flavor though — wonderful! You really can taste the difference. I will definitely be milling my own flour from now on. Now I just need to get some airtight storage tubs so I can start buying grains in bulk and stock up.

Next on my self-sufficiency shopping list: a a solar cooker!