Spelling To The Beat Of Her Own Drummer

As I mentioned a couple of weeks ago, Elizabeth had qualified to participate in the HUSD Spelling Bee (Click here to view that post).

Today was the big day; we drove her down to the main office in Hemet to compete against 4th, 5th, 6th, 7th and 8th graders from every school in the district. There were 38 kids present in all.

Steve and I were very nervous, but Elizabeth? Totally unruffled. She was the picture of composure as we arrived at the compound and found the right building. “I hope they give me ‘inconvenience,'” she remarked cheerfully as we came in and got in line with the rest of the contestants. “That word is so much fun to spell.” We signed her in and they assigned her a seat number and a sample word for the practice round. To her great delight her sample word was ‘brain.’ One of her all-time favorite words. “Braaaaiiiinnnn,” she drawled happily as she went off to find the seat she’d been assigned and Steve and Luke and I went to look for seats over on the spectator side of the room.

When they began the practice round, there were some problems with getting the first couple of kids to speak up loud enough to be heard. A tech was called in to turn up the sound system before they moved on to the third contestant.

“They’re turning up the microphone,” Steve murmured to me. “Elizabeth….”

“…is going to blow everybody’s hats off,” I nodded in agreement. Last year Elizabeth was in the 3rd grade production of ‘Anza Then And Now,’ and had really cultivated her vocal projection skills. Her ‘mic voice’ is quite impressive, even without the actual mic.

For the practice round each child was asked to come up to the mic, introduce himself, say what grade he’s in, and spell his sample word. It all went smoothly until Elizabeth stepped up. “MY NAME IS ELIZABETH,” she began. You could practically see people bouncing in their seats as the shockwave spread through the room. She wasn’t shouting at all, she just has spectacular projection. “I’M IN FOURTH GRADE.”

“Hello Elizabeth,” smiled the Spellmaster. “You should teach a class on microphone etiquette. Your practice word is ‘brain.'”

“BRAAAAIIIIINNNNN” she intoned in a rather dramatic voice. She just really loves that word. “B-R-A-I-N. BRAAAIIIINNNN.” She returned to her seat.

After the practice round, the Spellmaster asked the contestants if they had any questions before the contest officially began. Several hands went up, including Elizabeth’s. The other kids all had questions about specific rules and details of the Bee.

Elizabeth’s question: “Can I go get a drink of water?”The Spellmaster looked mildly taken aback, but then told her that she could if she absolutely had to, but if she wasn’t back by the time her turn came she would be disqualified. I hastily got up and said I’d go get her a bottle of water from the refreshment table out in the hall. I fetched her the water and sat back down. 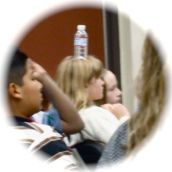 For a while my attention was on the other contestants as they stepped forward and spelled their words. The next time I looked at Elizabeth I was horrified to see that she was amusing herself by balancing the bottle of water on her head. There was nothing I could do about this flagrant breach of protocol, so I just squirmed in my seat until the Spellmaster sternly instructed the contestants to please stop doing anything that might distract the other contestants. Elizabeth took the hint and put her bottle on the floor.

Incredibly, one of the words she was asked to spell actually was ‘inconvenience.’ What are the odds of that??

You know that flamingo with the yoyo in the “Carnival Of The Animals” scene from “Fantasia 2000?” That was my kid today. Skipping happily along to the beat of her own drummer.

Sadly, she was eventually tripped up by the word “amateur” and did not qualify to continue on to the County Level.

It’s probably just as well. I don’t think the County and my yoyo-wielding flamingo are quite ready for each other just yet. Maybe next year.

3 thoughts on “Spelling To The Beat Of Her Own Drummer”