My seven-year-old son Luke is the only member of the family who has never embraced the equestrian lifestyle. This is partly because he has a natural inclination toward gadgets and machinery rather than horses, and partly because his ponies (we’ve tried several for him) tend to quickly pick up on his unassertive “passenger” riding style, and take full advantage of it. After being run off with a few too many times he’d gotten to the point where he didn’t want anything to do with riding at all.

Well, this is a cattle ranch: everyone has to be useful here. And neither Steve nor I was willing to accept that Luke would never experience the fun of helping to bring in the herd, or sorting cows and calves in a branding pen.

So about a week and a half ago Steve came home and announced that he’d found the perfect horse for Luke. “He’s just a loaner, but he’ll help Luke build his confidence up. He’s push-button safe.”

Steve pointed out that a good horse is better than a bad pony.

I thought about that, and then said if Luke was game I was. So a few days later we all went to check out this paragon of obedience. 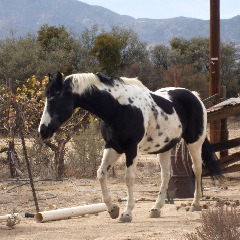 The instant we laid eyes on him, Luke and I started having second thoughts. This was a very *big* horse — bigger than any of the ones in our own string at home.

I tended to agree. I mean, it’s one thing to take a tumble off a 12-hand pony. A fall off this monster could break bones!

“Give him a try,” Steve urged. So we saddled up Gigantor (actually his name’s Beau), and Luke rode him around the yard, shaking like a leaf and whimpering the whole time. Luke I mean; Beau was fine. Maybe a little on the sluggish side, but that’s not such a bad thing for a kid who’s been soured by too many bolting ponies.

“He’s too big,” Luke repeated after the test drive.

“It’s totally up to you,” I told him. “We can take Beau home for you to ride, or you can go on riding Trinket.” Trinket is his current pony, a cute little thing with a scarily unpredictable streak.

He thought about it for a long moment, apparently weighing Beau’s lumbering compliance against Trinket’s perky stubbornness, and then mumbled, “I’ll take Beau.”

So we brought Beau home, gave him a few days to settle in, and then the four of us went on a family trail ride. Luke started out terrified, trembling, protesting loudly to all and sundry that he’d never wanted to learn to ride in the first place and lamenting about the unfairness of life in general. But by the end of the ride Beau’s laid-back obedience had lulled him out of his fear, and he even seemed to have gotten used to the size of his new mount. Steve and I agreed that we should do family rides every Sunday for as long as the nice weather holds out, to work on Luke’s riding.

Yesterday, to my amazement, Luke prompted us to start getting ready for our weekly ride. “Come on,” he pressed, “I thought we were going to ride on Sundays!”

Since Luke was feeling more comfortable, and the weather was gorgeous, we went for a much longer ride this time. Beau and Luke (believe it or not, the Dukes of Hazard joke never occurred to me until I started writing this post) got along beautifully, and Luke even voluntarily trotted up at the front of the group for a while! Woohoo!

What a difference the right mount makes! We’re hoping this will be a turning point in Luke’s feelings about riding.

And many thanks to Ted and Bentley for the kind loan of their horse. :^)

We’ll have that boy ridin’ herd before he knows it!