We’d planned to check out the Mystery Castle in Phoenix on the return trip, but with Elizabeth not feeling well I was prepared to skip it and just head straight home. This suggestion was met with dismay by both kids, though, so on to the castle we went!

The Mystery Castle is at the center of a tale of woe and whimsy. Apparently in 1930 a man named Boyce Gulley found out that he had terminal tuberculosis. He reacted to this news by abandoning his wife and toddler daughter Mary Lou, running away to Phoenix, and building a castle there for the child he’d left behind. Not being a wealthy man, he chose a site near the town dump and built his castle out of whatever he could salvage: bits of cars and wagons, discarded bricks and blocks and stones, old bottles, you name it and he used it.

His wife and daughter never saw him again, or heard anything about him until after his death 15 years later, when they recieved legal notice of the property they’d inherited.

Something about this story tickled my kids’ imaginations in a big way; they really wanted to see a castle made of salvaged odds and ends for themselves.

This “castle” is really something. The materials it was built from were very Southwestern in flavor, so the final product is equal parts Camelot and Spanish Hacienda: 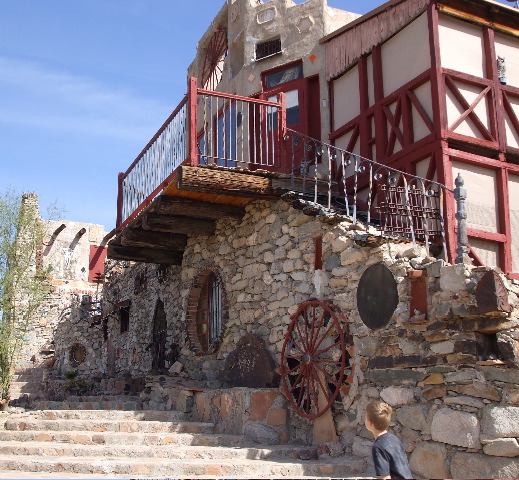 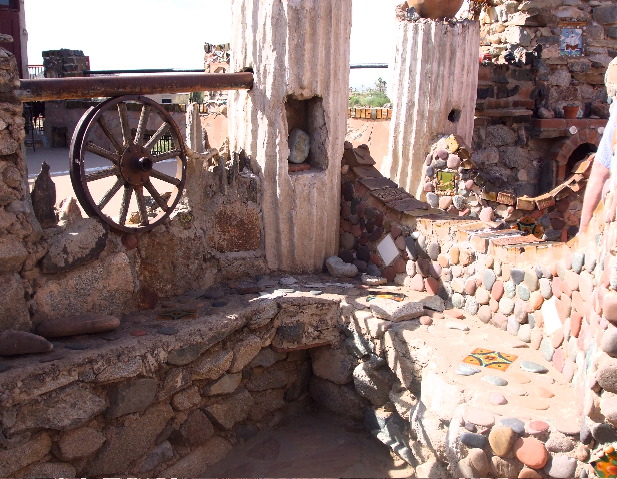 Nearly all the furniture, both inside and out in the courtyards, was built-in. Doesn’t this guest bed look comfy:

There are a total of 13 fireplaces in the castle. Because Phoenix can get, you know, a little chilly for three or four weeks out of the year. ;^)

Here’s one of the windows in the chapel:

Mary Lou Gully actually still lives in the castle her father built for her. Some of–well, *most* of her decor choices are a bit eccentric. 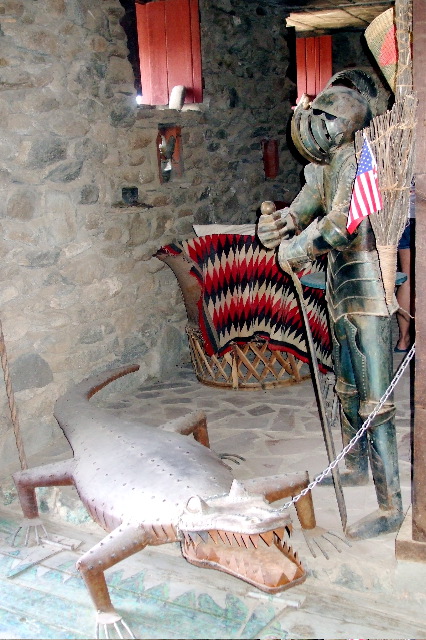 This is the bottom of a dumbwaiter shaft that comes down into the “tavern.” The top of the shaft looks like a wishing well on an upper courtyard. Pretty nifty design for keeping partygoers well-supplied:

Poor Elizabeth skipped most of the inner tour for fear of throwing up inside the castle, but she did make it through the whole visit without any mishaps. 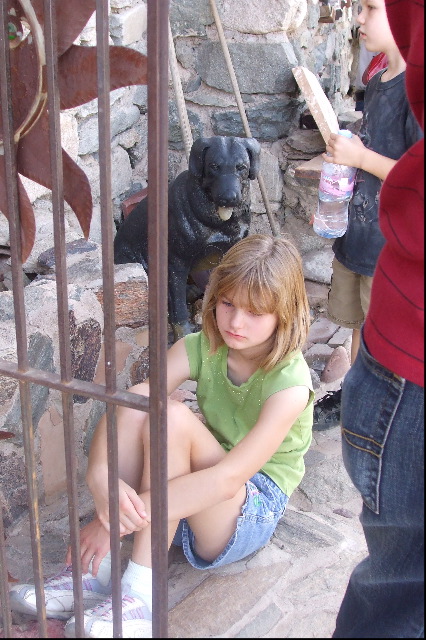 My pics don’t really do this place justice–it’s quite the architectural wonder.

When we’d seen everything there was to see, we got back in the car and headed for home. Here’s a shot of Palm Desert as seen from a few miles farther up the Palms To Pines Hwy:

We arrived home a little past 8pm, local time, and immediately got buried under an avalanche of happy dogs and a happy Steve. I helped Elizabeth get settled into a warm bath, and then just kicked back and enjoyed being home again.

This road trip was an amazing experience. Three weeks later the kids are still talking about things they saw and did from one end of the country to the other. As for me, I’ve settled back into the domestic routine with a fresh sense of contentment and appreciation for the life I have here. Just in time for Thanksgiving, I have reconnected with my thankfulness.