We recently discovered one of the nicest parks in DFW for a longish, moderately challenging hike.

Cedar Ridge Preserve in southwest Dallas offers woodsy paths and a sweeping view from the crest of the Cattail Pond Trail.

The elevation only goes up to 750 feet (this is DFW after all) but the cedar thickets and general ambiance are reminiscent of more mountainy states. 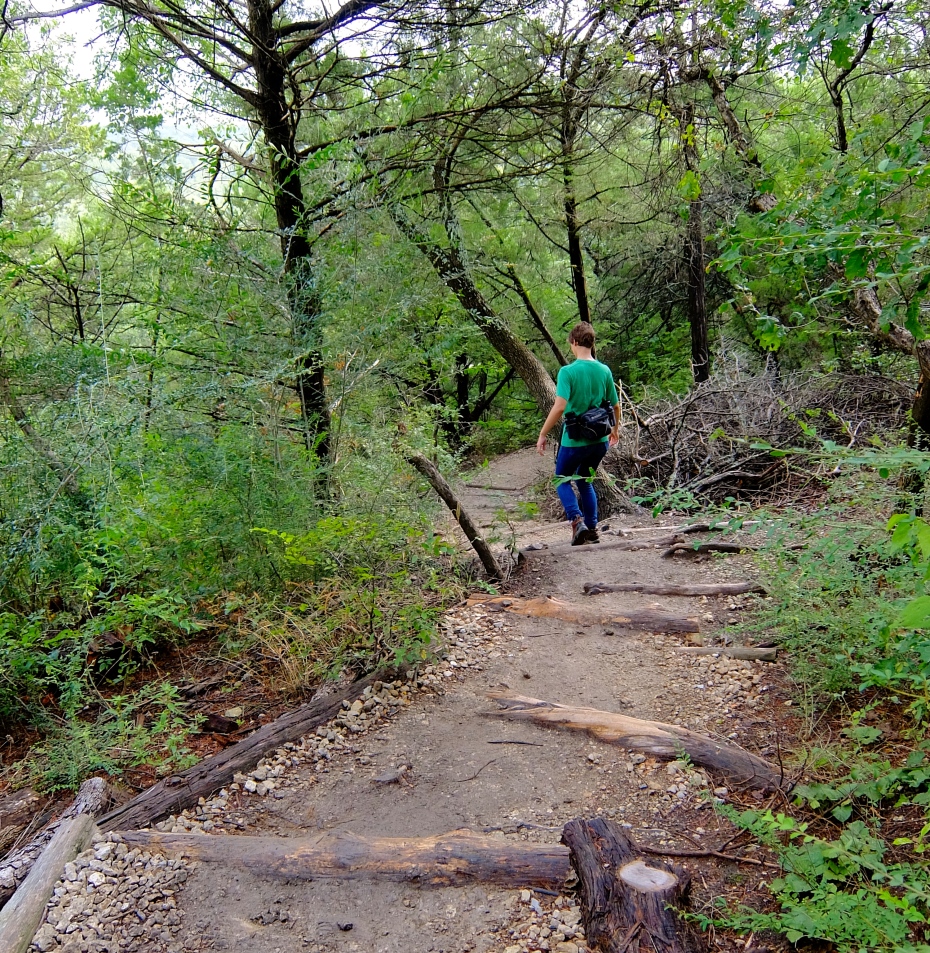 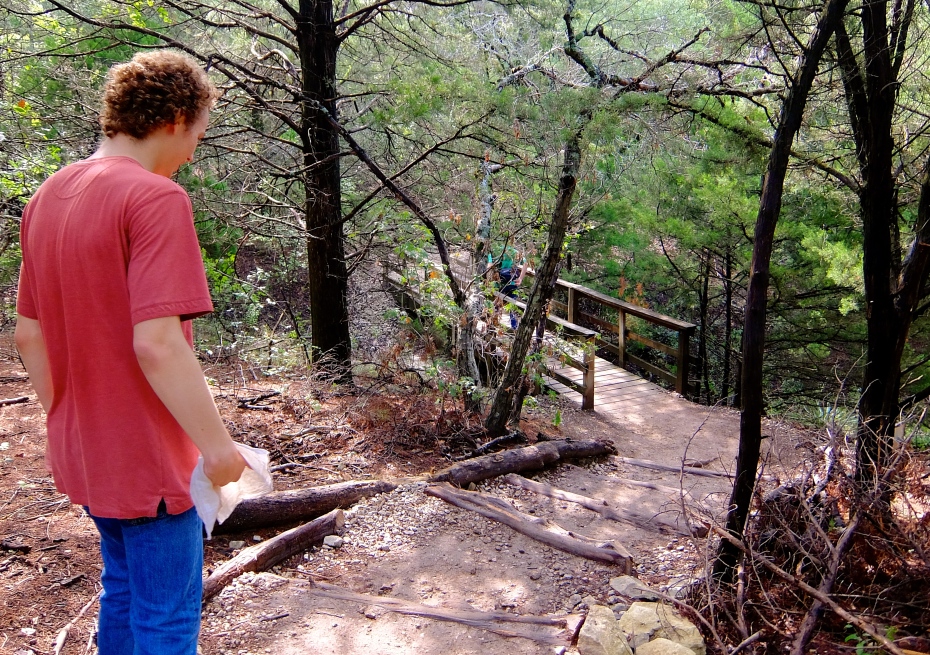 I enjoyed it a lot. Luke thought the day was too hot for hiking. He’s more into urban exploration these days, so after a pause for lunch at a local Cheddars, our next stop was Thanks-Giving Square in downtown Dallas.

We parked next to this building, which was being cleaned by window-washers. I’d never really thought about it before, but now I can’t decide if that would be a terrible job or an awesome job to have.

The same boy who was too exhausted to take another step on the trails of Cedar Ridge was miraculously restored to full energy levels once he was back on pavement.

We had come to Thanks-Giving Square to see the chapel, specifically its ceiling. But the Square itself was a pleasant surprise.

When you stand in the gold ring and speak, it amplifies your voice. Pretty cool. 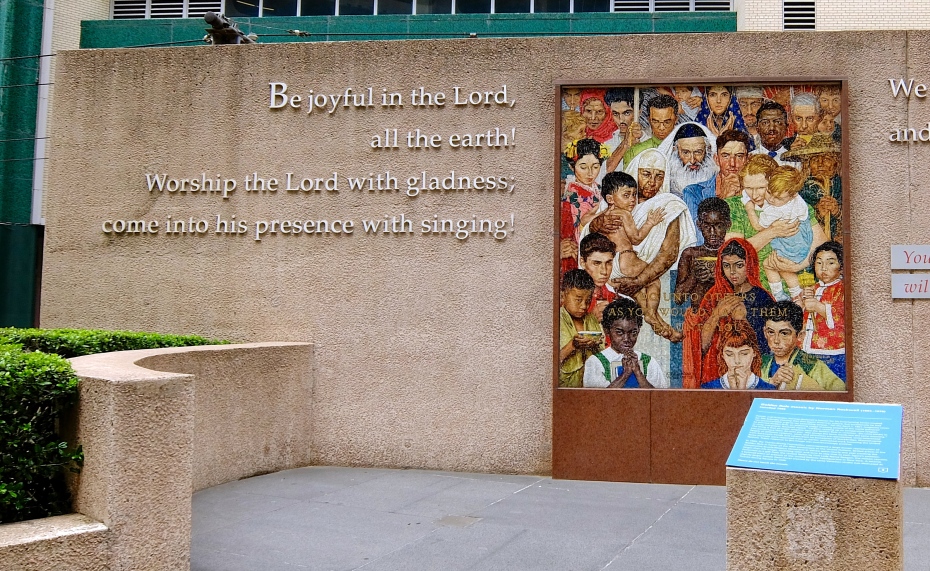 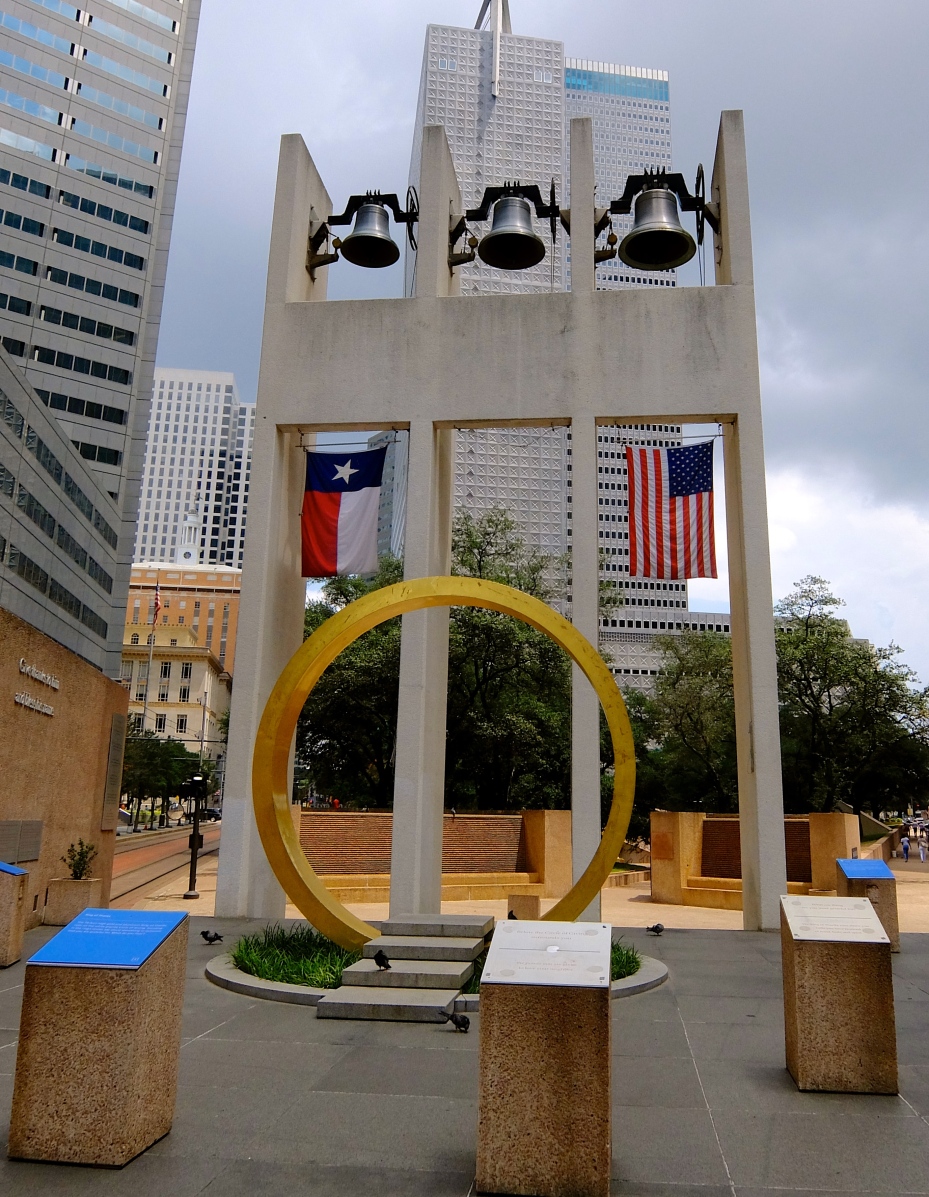 The chapel is small and unassuming…

…but its stained-glass-spiral ceiling is magical. 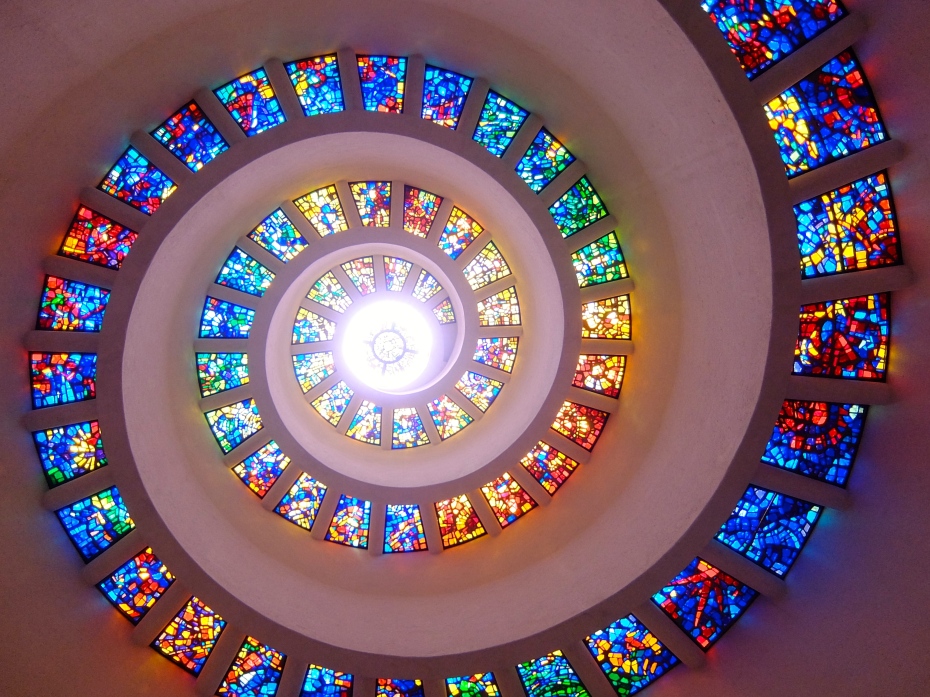 Just inside the door is a braille description of the ceiling and a raised image of it, so that blind people can “see” what it looks like. I love that.

Thanks-Giving Square is also the entry point to the Dallas Pedestrian Network, a system of tunnel and bridges connecting 36 blocks of downtown. It’s still in use, but it’s kind of a failed experiment. We walked a little of it and saw mostly empty corridors and abandoned shopfronts.

We left the tunnels by a different exit and explored the downtown area a bit. Just to look at and walk around in, Dallas is actually one of our favorite cities. Aesthetically speaking, we like it better than downtown Austin or downtown Fort Worth. I’d never want to live in Dallas though, it’s the most unabashedly materialistic, classist and soulless culture I’ve ever experienced.

It’s hard to capture the visual appeal of Dallas in photographs. You can’t really do it from the middle distance. 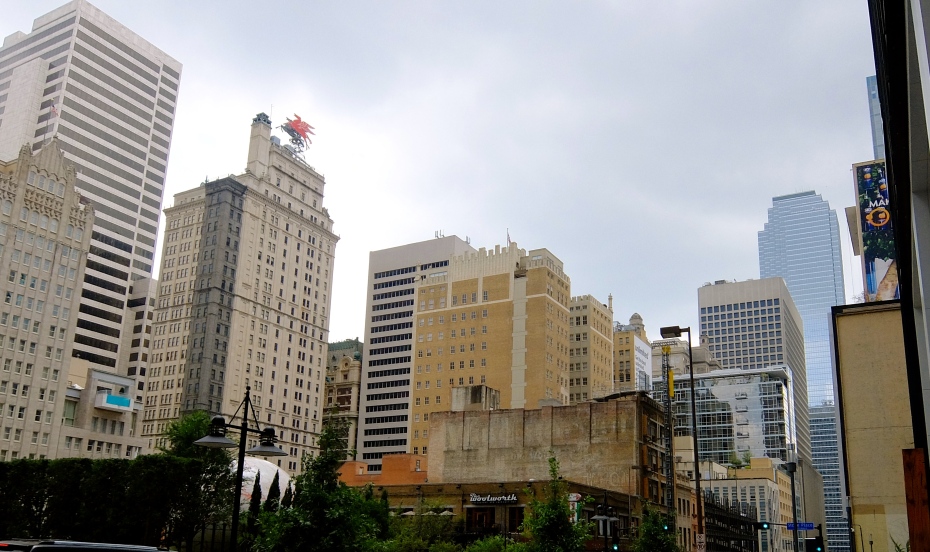 You have to reveal it one close-up at a time, little snapshots of urban beauty. 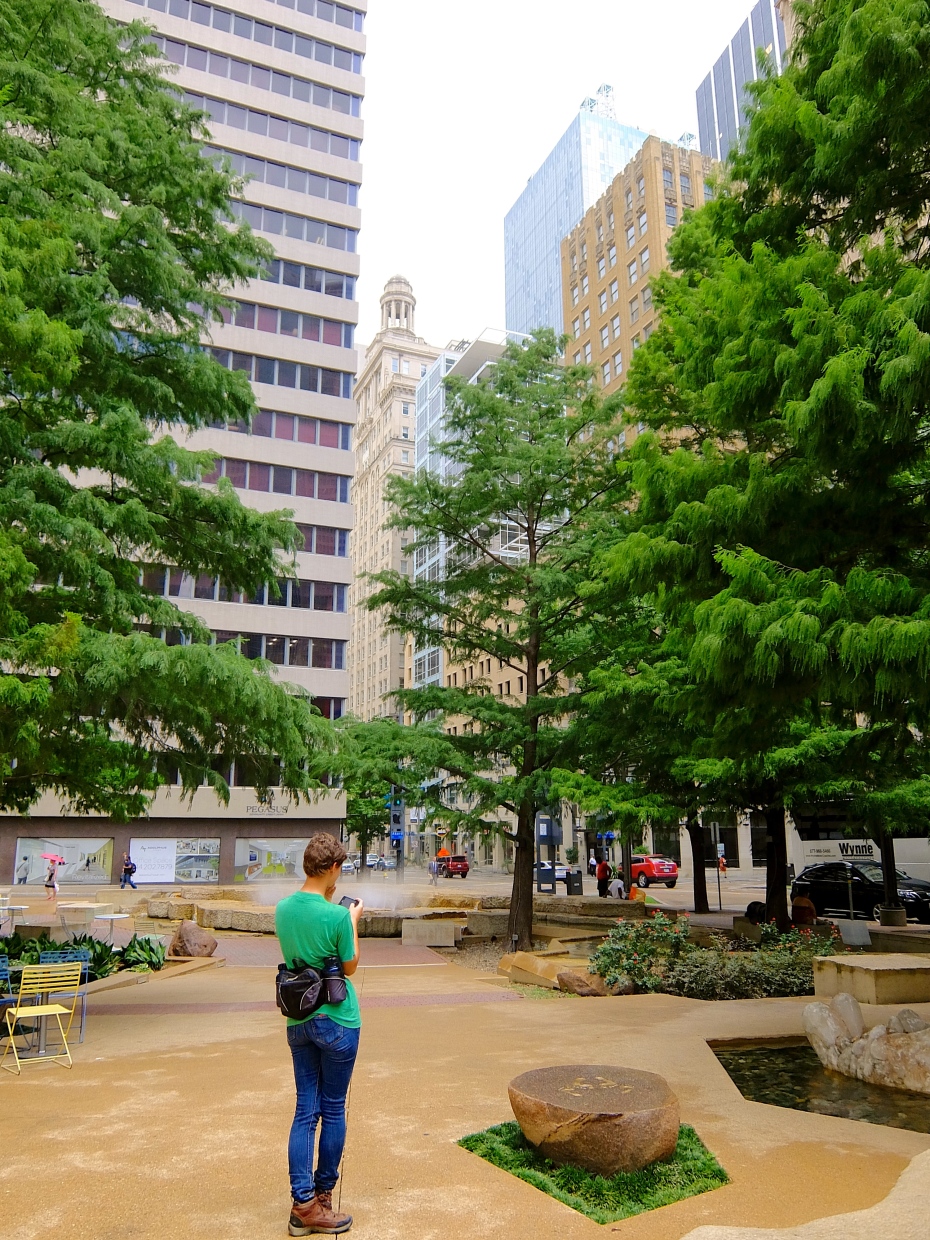 Note to self: remind Elizabeth to take off the supply pack once we’re off the trails.

Ever get the feeling you was bein’ watched?

I really wanted to get a good shot of this building, which is clearly either haunted or infested by vampires, but the street was too narrow.

Best I could do: 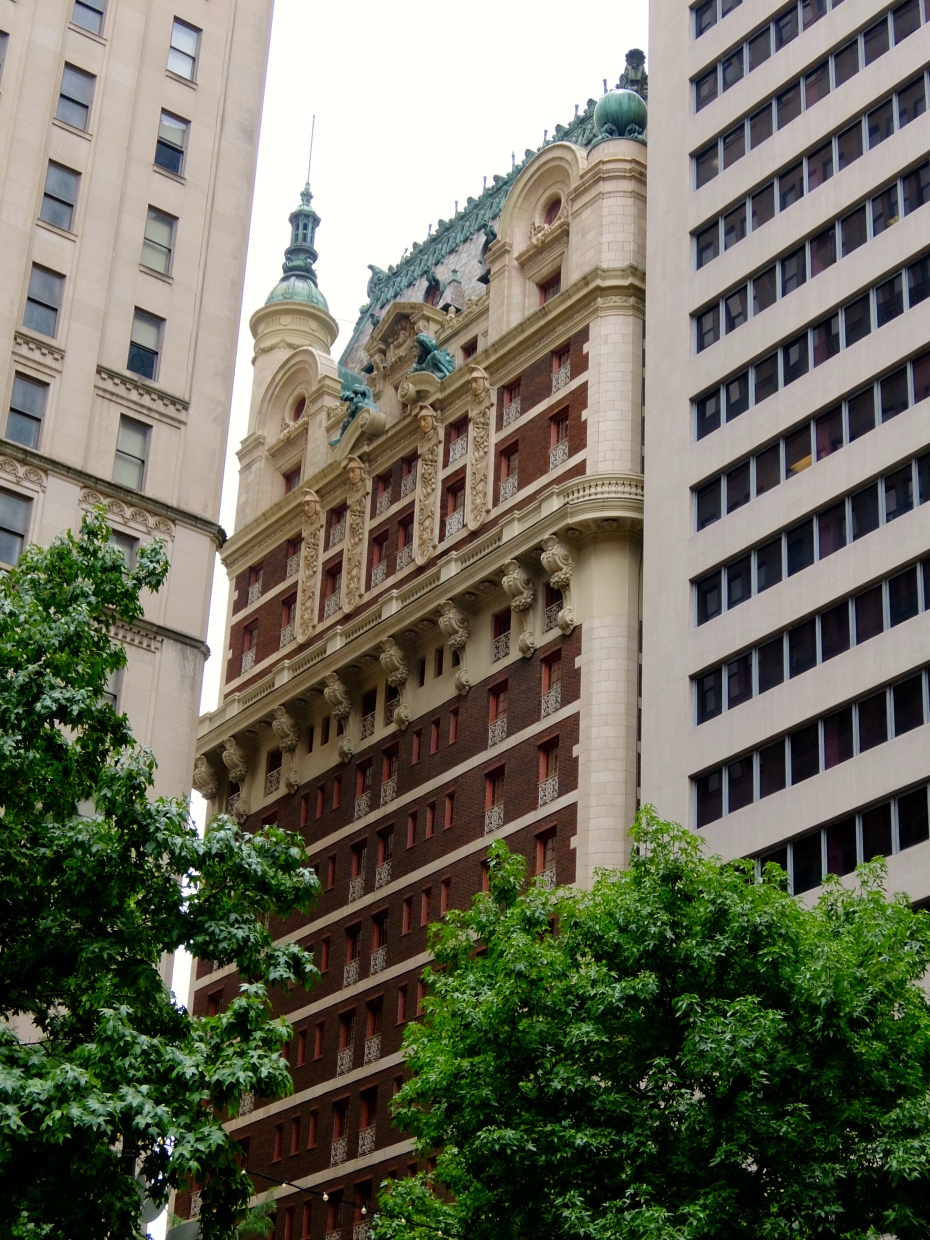 Luke wanted to hang around and see the city at night. Since it was still fairly early in the day, and the Dallas Botanical Garden has $1 admittance in August, we decided to kill a few hours there.

As soon as Luke’s feet were back on grass, he remembered that he was too hot and tired to walk around. I was able to keep him moving for a while…

…but pretty soon he found a shady bench to nap on and said to come find him when we were ready to go.

Elizabeth and I wandered for a bit…

…and then she gave out on me too. Kids these days, no stamina just because it’s like 150 degrees out. I explored on my own for a little longer, and found some areas I’d missed on our last visit.

Always nice to find unexpected Johnny in the wild.

When I’d seen everything I wanted to see I found the kids again, but we were still a few hours away from sunset. We decided to kill time in a nice air-conditioned movie theater. Luke hadn’t seen “Baby Driver” yet since he was in Anza when Elizabeth and I went to see it, so we found a local showing. Luke loved it as much as we did.

It was still not dark yet, so when we pulled around the shopping center that the theater was in and saw an electronics store, Luke said he wanted to go in and look for something.

It was one of the oddest stores I have ever been in. 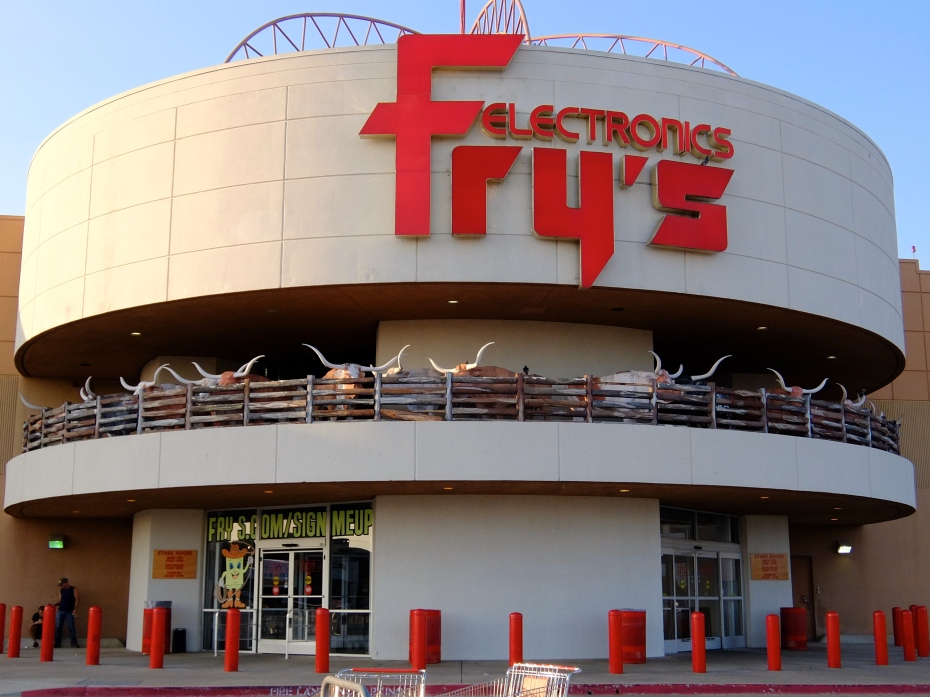 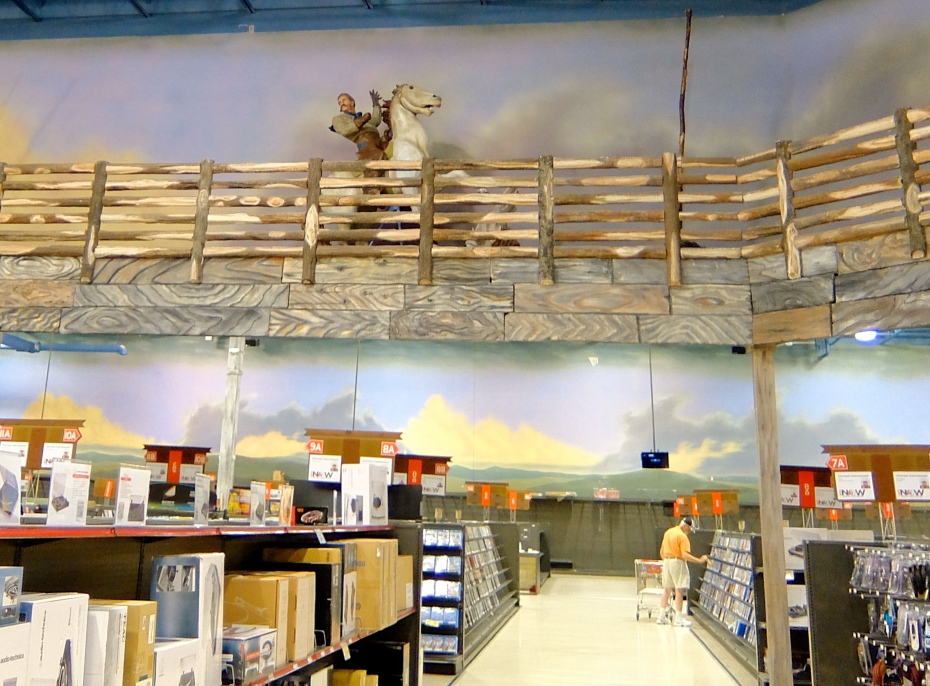 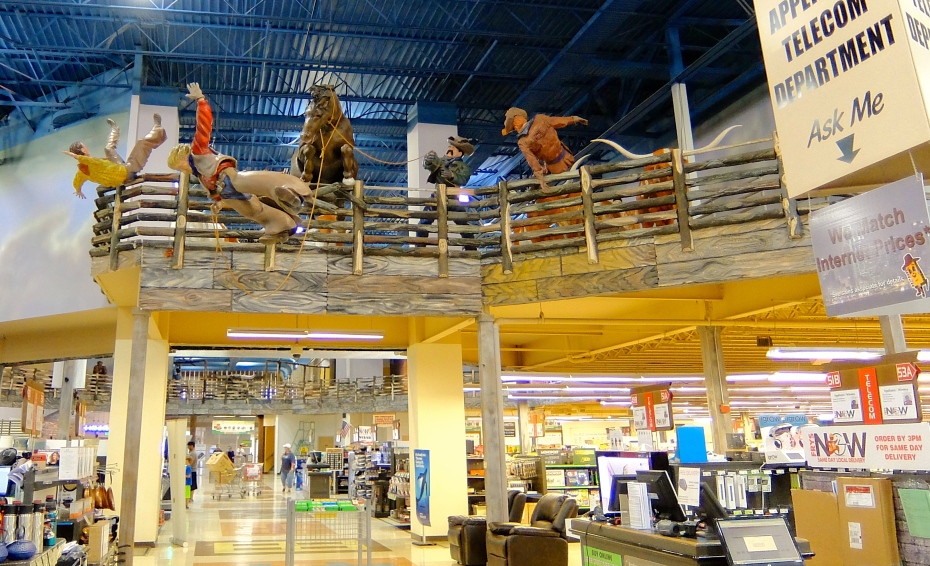 It did not have the parts Luke was looking for, but by the time he was done looking the sun was setting, so we headed back toward downtown. I don’t have many good pics from after dark, because I didn’t bring a tripod, but it was a pretty walk. 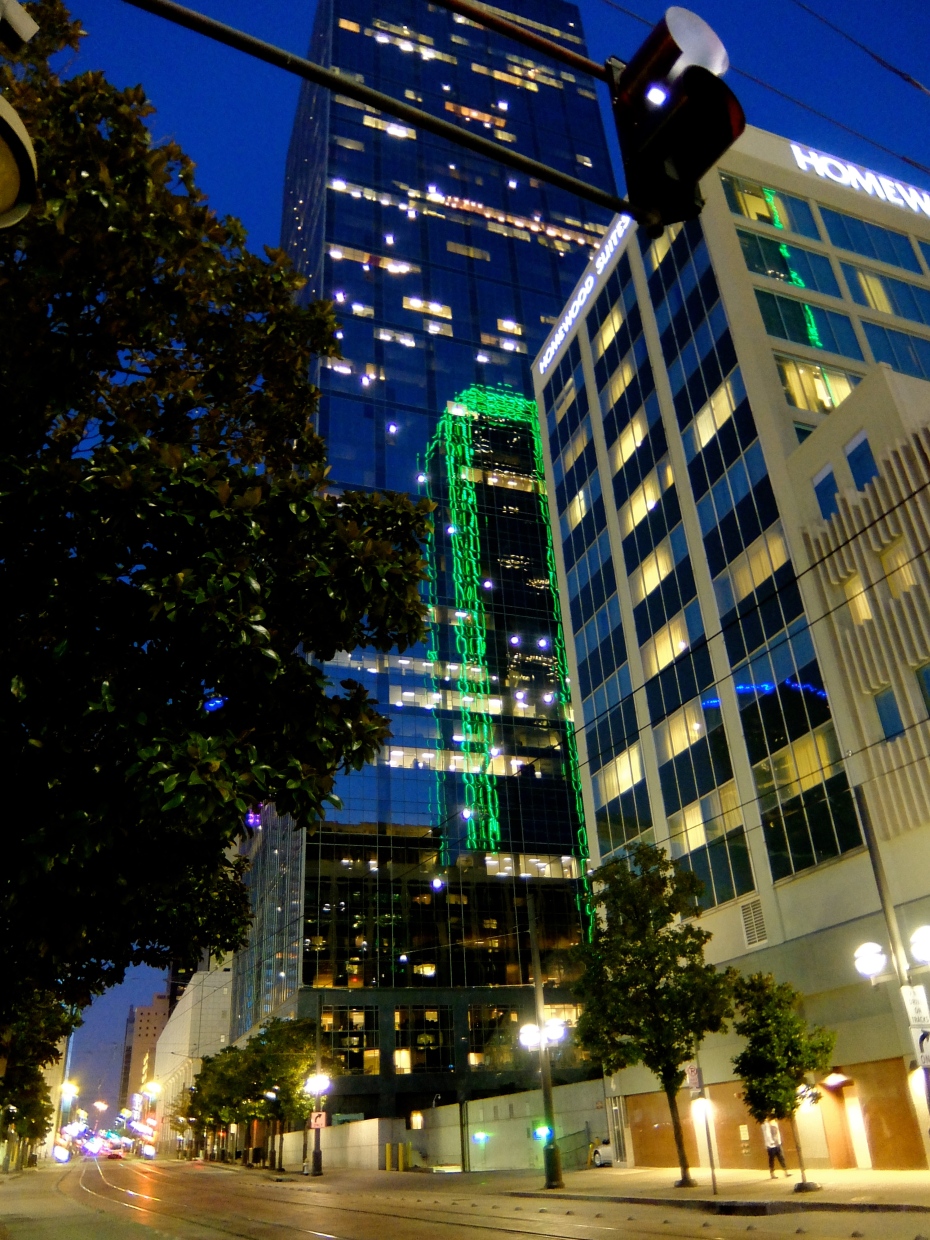 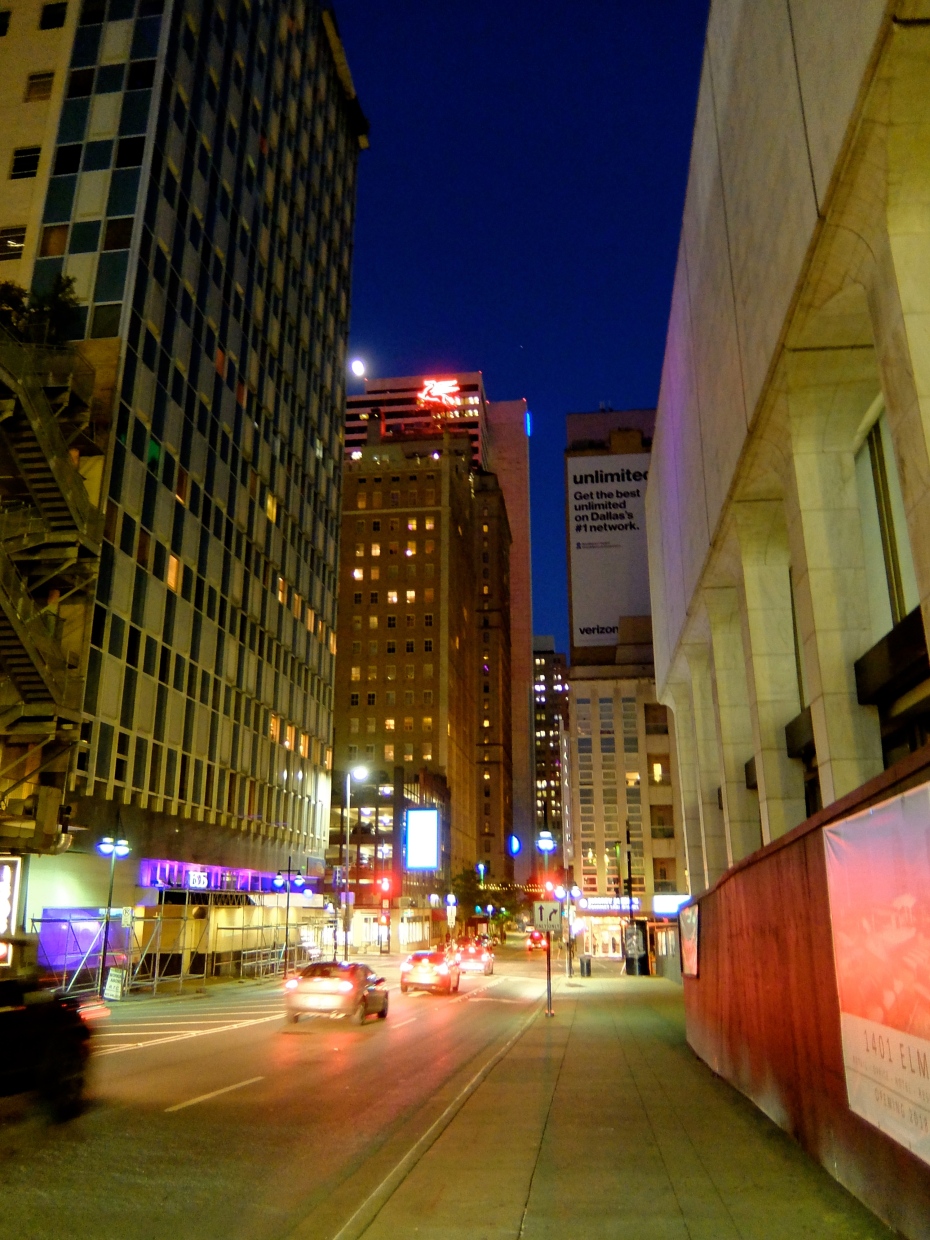 Thus ended our day in the city. As I write this, five weeks later, the heatwave has ended and the weather is turning to fall. Harvey had just submerged huge swaths of south Texas and Irma is currently plowing through Puerto Rico on her way to Florida. Most of the northwest is on fire. Interesting times.